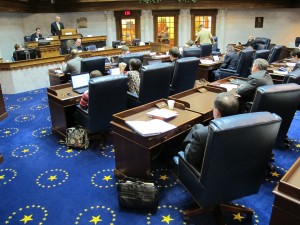 The Indiana Senate Education Committee meets in the Senate chambers in February.

Lawmakers in both Indianapolis and D.C. are asking the same, tough question about proposals to create new pre-K programs at both the state and federal levels:

How much does it cost to do preschool right?

A state-level plan slated for a vote in the Indiana Senate Education Committee on Wednesday would create a $7 million statewide pre-K pilot program for 1,000 students.

That means the program would cost $6,800 per student enrolled — an amount that Sen. Jean Leising, R-Oldenburg, told the Indianapolis Star “struck [her] as high for preschool.”

The proposed $6,800 per student is higher than numbers we’ve reported before. But the New America Foundation recently estimated a newly-proposed nationwide preschool program should, in fact, cost more like $8,000 per pupil.

As we’ve reported, it’s hard to keep pre-K teachers from leaving for K-12 schools, where they typically make more money.

“If you’re in a labor market where for the same skill set, you can increase your pay by almost double — you’re going to do that,” Steve Barnett, who directs research for the National Institute for Early Education, told StateImpact earlier this month. ”Very few teachers are going to stay year after year and pay that kind of price for the pleasure of teaching very young children.”

Indiana University’s Center for Evaluation and Education Policy suggested in 2006 the state could spend as little as $3,500 per student (roughly $68 million statewide) or more like $5,000 per student (closer to $100 million in total) on a half-day program.

As we wrote last April, the National Institute of Early Education Research says Indiana could spend $4,130 per student. (It’s not clear whether that estimate would cover a full- or half-day program.)

Meeting those cost obligations, as Eduwonk‘s Andrew Rotherham points out, might be difficult.

“Delivering high-quality pre-K is an investment that pays off in the future — but it’s one that Washington has to pay for now,” Rotherham blogs.

Similar story in Indianapolis, as the Star‘s Scott Elliott writes:

Cost was on the mind of senators like Luke Kenley, R-Noblesville, who chairs the Senate’s powerful appropriations committee. His concern? That the pilot program might prove so convincing that the state would be compelled to offer preschool to all of Indiana’s poor children. By his math, based on the income guidelines in the program, that could cost the state $544 million a year.

Kenley’s math would cover a universal program for 80,000 students — roughly the enrollment in kindergarten this year.