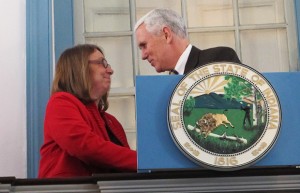 Indiana’s property tax caps have proven fruitful for property owners, who would’ve paid an additional $704 million to local governments this year if it weren’t for the constitutionally-enshrined caps.

But property owners’ gain has also been Indiana schools’ loss — to the tune of $245 million in lost property tax revenues for districts across the state last year. (That’s up from $142 million lost to property tax caps in 2010.)

Against that backdrop, Gov. Mike Pence and top Republicans have aligned behind a proposal from the state’s business community to phase out a property tax on business equipment.

The details are still fuzzy, but without a replacement revenue source, the move would mean another hit of more than $500 million to local governments.

“I think it’s important to [phase out the business personal property tax] in a way that doesn’t disadvantage local communities or local schools,” Pence told reporters after outlining his education agenda this week. He added:

As Purdue economist Larry DeBoer explains at Howey Politics Indiana, eliminating the nearly-$1 billion business personal property tax would shift tax burdens to other property owners. They would pay an additional $450 million in taxes, while local governments would still lose out on more than $500 million.

Of that sum, school districts across the state would see nearly $200 million in revenue losses, according to a memo presented to a state legislative committee in 2012.

Pence later told the The Times of Northwest Indiana there are multiple ways lawmakers could allow local governments to offset the losses. He didn’t rule out the option of raising county income taxes.

According to state finance data, two-thirds of the state’s school districts lost less than 5 percent of their property tax revenues to the caps last year.