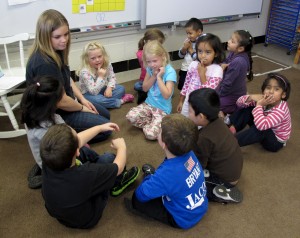 Students sing songs with their teacher at Busy Bees Academy, a preschool in Columbus.

Here’s one you’ve heard before: Lawmakers of both political parties at the statehouse are pushing to put state dollars behind an early childhood education program.

Yes, pre-K’s back — potentially in the form of legislation that’s “similar to what we had last year,” says House Education Committee Chair Bob Behning, R-Indianapolis.

It’s not clear what form their plans will take this session, but as proposed last January, lawmakers would’ve created a $7 million pilot preschool program for 1,000 low-income students statewide.

But the members of the Senate Education Committee scaled back that proposal significantly, passing legislation instead that focused on rating child care programs. The hangup on a pre-K bill this year could potentially be the same: cost.

“Everybody just keeps saying, ‘We want pre-K,’ and I’ve never even had an explanation of what services they want or what their objectives would be,” Senate Appropriations Committee Chair Luke Kenley, R-Noblesville, told StateImpact last week.

Kenley added he doesn’t know where funding for a preschool proposal would come from, especially in a session where lawmakers won’t craft a budget.

A potential differencemaker in the discussion could be Gov. Mike Pence, who made early childhood education a priority during his run for office. He’s reportedly on-board to back the Republican leadership’s push to pass preschool legislation of some kind.

Behning says in measuring the cost of an early childhood education program, lawmakers ought to consider its economic benefits. He says students who arrive ready for kindergarten are less likely to end up in the criminal justice system. He told StateImpact:

Start looking at those costs, and compare the costs of educating those children — I think if you really did some longitudinal data comparisons you’d find that it actually doesn’t cost us money, it actually could end up saving us some money in terms of remediation, in terms of changing the trajectory for some of these students so that they do have opportunities in life outside of [the] criminal justice [system].

But Kenley says there haven’t been enough discussions of what preschool legislation would or should look like — and how the state would pay for it. He said in an interview:

We debated full-day kindergarten for several years and went through all kinds of analyses about what it does, where it helps, where it works, where it doesn’t work. We haven’t done any of that with the pre-K program… There’s a lot of discussion to be had on the substantive issue itself in addition to, if we decide that it’s worthwhile, then finding the funding.

The back-of-the-napkin math remains the same, Kenley says — if the pre-K pilot works, paying for a statewide program could be costly. We’ve written perhaps too much about how much broader preschool initiatives could cost, but suffice it to say low-end estimates start at $68 million.

Indiana is one of 10 states that does not provide a state-funded preschool option. An estimated 30,000 at-risk Hoosier students do not have access to early childhood education programs.

“Signs are good that Indiana could make progress on state-funded preschool,” blogs School Matters‘ Steve Hinnefeld, who’s advocated for expanded early childhood programs in the past. “But signs have been good before, and there’s been little progress to date.”