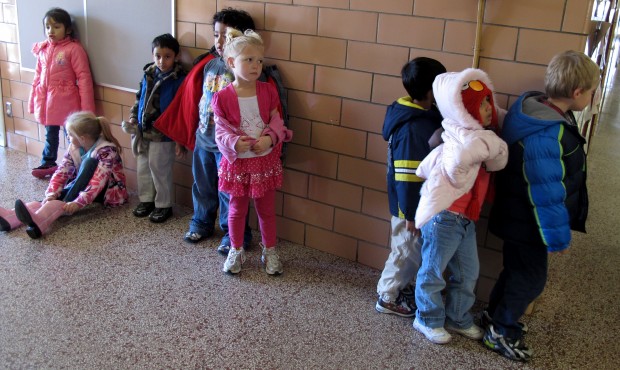 Gov. Mike Pence would like to see more public-private partnerships like the one in Columbus fund pre-K programs.

Indiana is one of ten states that doesn’t provide any public money for pre-kindergarten programs. But Senate Democrats plan to introduce universal pre-K legislation in 2014, reports Brandon Smith for Indiana Public Broadcasting:

Senate Minority Leader Tim Lanane says Indiana is stalled and that backing pre-kindergarten programs for every Hoosier child is a way to move forward.

Lanane says high quality pre-K produces students who are more likely to graduate high school, earn a higher income and own a home and less likely to require remediation or commit crimes.

“We think this is a investment that will pay for itself over time — and more than pay for itself,” Lanane says. “There are benefits that flow back.”

“The pilot wouldn’t be too expensive, but the objective there is that it probably would work out and they’d want to come back and fully fund that, which could be $150 million a year, which would be a lot of money,” Senate Education Committee Chairman Dennis Kruse, R-Auburn, told StateImpact at the time.

On Thursday, Lanane put the cost of statewide universal pre-K around $197 million — closer to what the state pays now for kindergarten.

Without state money for pre-K, the only option many low-income Hoosiers can access is through the federally funded Head Start program. But Indiana Head Start classrooms have lost more than 700 slots because of the sequester, and many had long waiting lists to begin with.