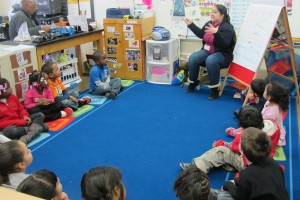 A Head Start teacher in South Bend reads to her class of 4-year-olds.

Indiana is one of 10 states that doesn’t provide any public money for preschool — but, if elected leaders get their way, that could change soon.

But early learning advocates say the success of the initiative will depend largely on how Indiana measures quality.

“Are they going to put in that oversight if they’re giving vouchers? Is that oversight any good?” says Ann Rosen, co-director of the Family Connection, a non-profit that provides teacher assessments to pre-K providers in St. Joseph County.

In the absence of state leadership on early childhood education, it’s been up to community foundations such as Rosen’s to fill the void.

This fall, Rosen’s staff spent more than a thousand hours observing early childhood educators and offering feedback on a 5-point scale. The ratings have helped teachers improve their practice — often, from ones or twos initially to fours and five over time.

About a third of the evaluations Family Connection provides are for the Head Start program in St. Joseph and Elkhart counties.

“The most subjective, but in some ways the deepest recognition of quality, is that I would put my grandchildren here,” says Rosen of the Head Start center in South Bend. “Any day. I would — they’re so good.”

In recent years, Indiana has raised expectations for its youngest students. And that means it’s more important than ever that kindergarteners arrive at school ready to learn. So today the 4-year-olds enrolled in Head Start in South Bend are learning to walk in a line. 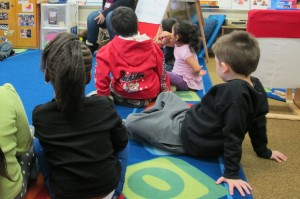 Students in Head Start listen as their teacher reads a story. The program helps kids build the routines they'll use in kindergarten.

“Those are the things we’re teaching,” says Head Start Director Kathy Guajardo. “Even to open your milk. For a kindergarten teacher, that may not sound like much, but when you’ve got 25 kindergarteners and only 5 or 10 of them know how to open their milk, you’re going around opening milk the first few days of kindergarten.”

“I knew immediately who had Head Start, quality pre-K or didn’t have any type of preschool background at all,” she says.

For many low-income Hoosier families, the federally-funded Head Start program is the only affordable option. But there aren’t enough spots to go around. Nearly 1,100 kids attend the program Guajardo oversees. That leaves out another 700 are income-eligible.

“With so many children not being served, that’s the target,” says Guajardo. “That’s where we need to figure out what we can do to get them in.”

Existing Rating System Good For Childcare, Less So For Pre-K

Pence’s plan would provide pre-K vouchers to low-income Hoosiers living at 185 percent of the poverty level or below — about $43,000 for a family of four.

“Children can utilize the voucher at a public or private provider, and providers will of course meet the pre-determined quality standards in the marketplace,” he told reporters.

But that could be challenging because the state’s ranking system for childcare providers wasn’t designed to rate preschools.

“When the state of Indiana put together their Paths to Quality, we thought that it was going to include a pretty strong program on teaching parents what quality was,” says Rosen. “But if it’s out there, I haven’t seen it.”

Family Connection works with more than 30 early learning centers and home daycares in St. Joseph County, helping them implement a developmentally-appropriate curriculum. Part of the problem, says Rosen, is that parents don’t realize what that looks like.

“Parents are used to getting a particular product home, a worksheet that’s colored in, a cookie cutter piece of art,” she says, “and that’s what they view they should be getting home from their kids. So if programs are trying to be more developmentally appropriate, they’re not doing those things, that’s a harder sell because a parent wants to see that worksheet.”

Rosen’s next stop is a home daycare on the north side of South Bend. Ruthie Scott’s living room looks like a miniature classroom. Craft supplies are stored in neatly labeled plastic boxes, and a bulletin board displays information for parents.

Scott decided to start her own business after working for years at Head Start and other childcare centers. Now she’s taking a class through Family Connection to improve her home daycare. 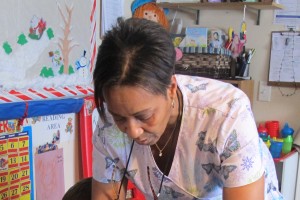 Ruthie Scott opened her own home daycare, My Little Schoolhouse, in 2009. She currently has 12 students enrolled.

“We basically go over skills like dealing with children, playing outside, putting it all together — whatever skills are age appropriate,” says Scott.

Her goal is to move up a level on Paths to Quality early next year.

“There are four levels — one, two, three and four. The highest level is accreditation,” says Scott. “I’m looking to be rated in the next month or so for level two.”

Before Rosen leaves, Scott pulls out the portfolio she keeps for each student. That way, parents who are apart from their kids for most of the day can see the progress they’re making.

“You can see the change,” says Rosen.

Back in the car, Rosen says there are always going to be parents who prefer small, in-home daycares such as Scott’s to early childhood education centers. In giving parents options, she says, Pence is on the right track.

“I think it would work,” Rosen says. “I just always think about the issues of quality.”