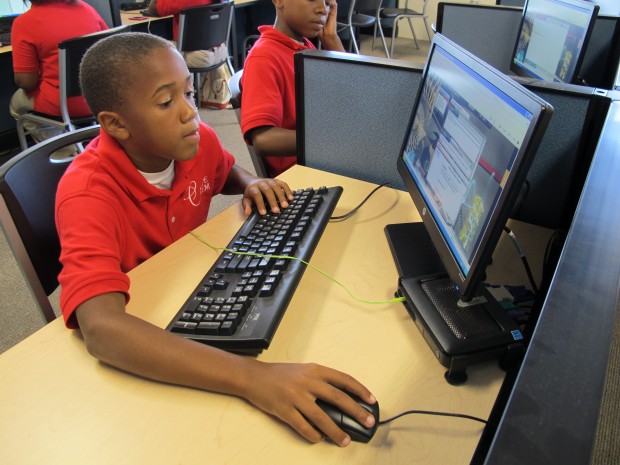 BLOOMINGTON, Ind. — For the first time, schools will be required to teach computer science skills to all Indiana elementary and middle school students.

Indiana will be one of seven states with formal statewide computer science standards this school year.

All summer, computer science has been a focus at the Lincoln St. Boys and Girls Club in Bloomington. About 20 rowdy campers pile into the club’s computer lab.

“So today what they’re doing is Archives,” explains Tabitha Cassani, the club’s program director. “It has a whole bunch of games from like the 80s and the 90s. Things that I played when I was little.”

Games like Pong, Oregon Trail, and Pac Man. The idea is to give kids a fun outlet to see how computer technology has evolved.

And the club also offers free classes in other computer skills, including typing, coding and robotics.

“It equalizes the playing field of kids being exposed to technology and getting that skill. Every job in the future is going to have a computer,” Cassani said. “Like my dad’s a mechanic, has a high school education, and he uses a computer every day.”

When summer’s over, computer science will be a new priority in school too.

“We really wanted to add computer science standards K-8, so we’re one of the first state to actually do that and require it for all students to learn,” said Jeremy Eltz. He oversees standards for the Indiana Department of Education.

In Indiana, computer science is now required through eighth grade.

By the end of 8th grade, students should understand the difference between hardware and software, know the functions of a computer network, and be able to troubleshoot certain software problems.

So, Eltz said they wrote the standards loose enough to be hit in any subject.

“Those should be taught across the board and not just in your science class,” Eltz said.

It standardizes what some teachers have done for years.

From Standards To Classroom Exercise

“I was the kid in the back of the car on vacation telling my parents where to go with the atlas, before we had smart phones” Robertson said. “Like, wanted to know where we were at. Wanted to know what direction we were going.”

So he brings that love into the classroom.

“One of the assignments that I really like is a Google Maps scavenger hunt,” Robertson said.

It’s part of Robertson’s geography unit for his students.

“I give them a list of some of the things that they have to identify. And in doing so we learn how to do google maps,” Robertson said.

It’s a way to teach students the subject matter and get them used to using technology. The exercise also meets the computer science standard that says students should create products with web tools.

“Like this student here has circled where the Rocky Mountains are,” Robertson said. “For beaches they put a little star fish next to it. For places they’ve been there’s a little star or little balloon.”

If you click on the different icons a picture of the location pops up. Students write descriptions of what they are. They then turn the project in online.

As technology’s changed, Robertson has seen his classroom change too.

“I mean yeah we talk, and yes I have lectures, and we talk about how to use this technology,” Robertson said. “But I think the education is really more in the kids hands.”

He said it puts them in charge of their own learning and teaches skills students will need for the jobs of tomorrow.

“You know – the ability to research information, get your questions answered, it’s the way of the world,” Robertson said. “And it makes students more independent and just overall better citizens.”