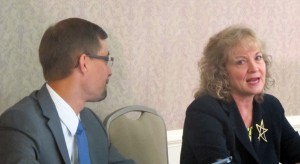 A panel of state lawmakers will hear testimony Tuesday on what test Indiana students will take next. It’s the second hearing in a three-part legislative review of new Common Core academic standards.

Indiana and 44 other states adopted the Common Core back in 2010. The nationally-crafted academic standards were designed to prepare more students for college and career. But some Hoosiers argue the Common Core State Standards aren’t as strong as the old Indiana Academic Standards. They convinced state lawmakers to pause implementation of the Common Core until state education officials can decide what Indiana schools should teach next.

Part of that review process includes picking a new assessment. Originally, Indiana students were supposed to take a Common Core-aligned test in development through the Partnership for Assessment of Readiness for College and Careers, called PARCC, in 2015. But new legislation that passed in the spring requires schools administer Indiana’s current test, the ISTEP+, through the 2014-15 school year.

So it’s unclear what test will replace the ISTEP+ in 2016. But today’s statehouse hearing might shed some light on which assessment is right for Indiana. Here’s what you need to know about each option state education officials have to consider.

One benefit of having common standards is states can save money by sharing resources. To that end, Indiana had been participating in one of two national consortia designing new assessments — PARCC.

State education officials stopped participating in the consortium around the time Superintendent Glenda Ritz took office in January. At the time, statehouse conversations around the Common Core made it unclear if Indiana would stay the course with the new standards. In July, Gov. Mike Pence signaled his intent to withdraw from PARCC.

“I’m someone that really believes education is a state and local function,” he said at the time. “I believe that not only stepping away from the PARCC exam itself, but also with the consortium is appropriate and it’s also an affirmation of the direction we’ve been given from the Indiana General Assembly.”

OK, so Indiana’s out of PARCC. But it’s still possible the state could rejoin the consortium. Representatives from Achieve, the nonprofit group working with PARCC to develop the test, planned to testify before state lawmakers Tuesday.

So what about Smarter Balanced, the other national consortium designing a Common Core-aligned assessment? Before state lawmakers voted to pause rollout of the new standards, Superintendent Ritz had expressed interest in joining both groups and going with whichever consortium designed the better test.

Pence may be uneasy about participation in national groups. But Sen. Dennis Kruse, R-Auburn, says Indiana may have to revisit the decision to go it alone if the State Board of Education decides to stay the course with Common Core.

“I think we’d have to a serious look at getting back into PARCC or going over to Smarter Balanced,” Kruse told Indiana Public Broadcasting‘s Brandon Smith last week.

Here’s one reason why state education officials may be reluctant to abandon the Common Core: If Indiana students don’t get the new standards, they may be at a disadvantage. Most college-bound students take either the SAT or the ACT, and both college admission exams will soon align with the Common Core.

So let’s say Indiana sticks with the Common Core. If the state doesn’t want to go back to PARCC or join Smarter Balanced, they also have the option of using new tests from SAT or ACT. David Coleman, one of the architects of the new standards, now leads the College Board, which administers the SAT. And ACT is getting into the game with new assessments called Aspire.

Alabama announced this spring it was leaving both consortia to take the new ACT test.

Indiana isn’t the only state that’s pulled out of the two assessment consortia in recent months. Utah, Pennsylvania and Georgia have also opted out. Oklahoma plans to design its own test to save money, and Minnesota has already rolled out a new English language arts assessment aligned to the Common Core. Kentucky and New York are also piloting their own tests, though both remain members of PARCC.

So it’s possible Indiana could join with other states to design its own Common Core-aligned test. But such a consortium would be at a distinct financial disadvantage — both PARCC and Smarter Balanced received federal Race to the Top dollars to design their tests.

Some Hoosiers would like to see Indiana stick with homegrown standards and the state’s own test. But even though Indiana’s previous standards were highly regarded, the state probably won’t go back to them.

Here’s why: The same legislation that requires state education officials review the Common Core also says the State Board of Education must use the nationally-crafted standards “as the base model” for any new standards they might write.

That means Indiana will need to retool the ISTEP+ even if the State Board doesn’t adopt the Common Core. And that could get expensive, says Terry Spradlin with the Indiana University’s Center for Evaluation and Education Policy.

“Major testing companies generally have contracts with multiple states,” he told StateImpact last month. “If they only have a state or two as a client moving forward, would the cost remain the same or would there be higher cost associated with our own assessment system?”