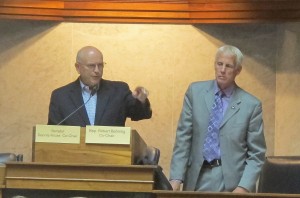 A panel of state lawmakers tasked with reviewing the Common Core have opened a formal debate over which set of academic standards Indiana will use next.

Monday’s statehouse hearing focused on the quality of the standards. Subsequent sessions will examine assessment and cost.

Though she spoke at the hearing, state superintendent Glenda Ritz says it’s not her job to select what academic standards Indiana schools will use next. A report the Department of Education submitted last month to the commission did not take a position on the Common Core.

“This was done in a manner so as not to influence the forthcoming process of adoption of standards in 2014,” Ritz told the panel.

Ritz says her concern is making sure the state ends up with the best possible standards. She says Indiana needs to take a close look at its math standards because too many students are graduating from high school in need of remediation.

Jason Zimba helped write the Common Core math standards. He says the new math standards are a step in the right direction if Indiana wants to prepare more students for college and career.

But opponents of the nationally-crafted standards told lawmakers the Common Core is less rigorous than the standards Indiana had before.

“Indiana would be better off sticking with its current standards,” says Bill Evers, a researcher at the Hoover Institution at Stanford University. “That does mean there are not areas of improvement.”

Evers, a vocal opponent of the Common Core, says the new standards delay crucial math concepts and put off teaching algebra until ninth grade. He says state education officials should be seeking input from the state’s colleges and universities on how to improve existing academic standards, not adopting the Common Core.

The commission has to make a recommendation on the Common Core to the State Board of Education before Nov. 1. That body has the ultimate say on standards adoption.