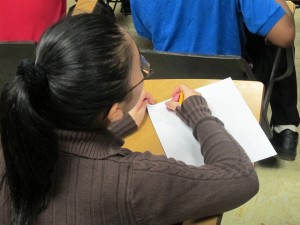 A student at a public intermediate school in Anderson.

A consortium writing Common Core-aligned standardized tests for 18 states released an estimate for how much their assessment will cost when it rolls out in 2014-15.

The PARCC consortium said this week its test will cost $29.50 per pupil for both the math and English language arts assessments.

Indiana’s technically part of the PARCC consortium, which means if Indiana sticks with the new standards, it might end up spending less on standardized testing than it does currently — but not by a lot.

According to the Indiana Department of Education, the state currently spends $16.46 per student, per subject to administer the ISTEP+ in its current online format. That means a third grader taking both the math and English language arts tests costs $32.92 to assess. It costs $49.38 to test a fourth grader, who also takes the science ISTEP+.

As a line item, Indiana lawmakers budgeted more than $45 million for testing and remediation over each of the next two fiscal years.

PARCC says charging $29.50 per pupil for both a mid-year and end-of-year test represents a cost savings for about half of member states.

But for the states who aren’t spending as much on testing now, there might not be money in the budget for a test from PARCC or the other national assessment consortium, Smarter Balanced, which plans to charge $27.30 for its assessment package.

State education officials in Georgia announced Monday they would leave PARCC and design their own Common Core-aligned test. Georgia currently spends about $10 per student for paper-and-pencil tests in math and English. Administering PARCC’s online test would also mean costly technology upgrades in the state’s rural schools.

With an increasing number of states opting out of the two national testing consortia, there’s a possibility they could band together to design a test instead of going it alone. That could cut down on some of the overhead costs we’ve written about recently, but such an alliance would be at a distinct disadvantage without the federal Race to the Top funds that have fueled the efforts of PARCC and Smarter Balanced so far.

Indiana remains a governing member of the PARCC consortium, though state education officials haven’t participated in quarterly meetings since State Superintendent Glenda Ritz took office earlier this year. Before legislators passed a new state law mandating a review of the Common Core, Ritz expressed interest in also joining Smarter Balanced to see who designed the better test. But now she says her department won’t participate in either consortium until Indiana makes a final decision about standards.

Ritz said last week her office is working with the Office of Management and Budget to prepare a mandatory cost estimate of Common Core adoption. That report is due Sept. 1.

Even if the state sticks with the new standards, the Department of Education is now planning to administer the ISTEP+ through the 2014-15 school year, a year later than initially planned. That pushes off the question of what test — and at what price — to use next for another year. The state is currently under contract with testing company CTB/McGraw-Hill through 2014.

At the State Board of Education meeting last week, board member Sarah O’Brien asked if the Department of Education had discussed the future of that contract after computer glitches ground ISTEP+ testing to a halt this spring.

“You’re right, we have to look at what we’re going to do with that contract with CTB,” says Ritz. “Those dialogues will be happening here right after the reports” on ISTEP+ validity come out.