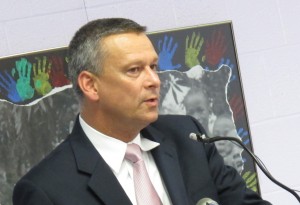 Georgia education officials announced Monday they won’t use the Common Core-aligned test being designed by the Partnership for Assessment of Readiness for College and Careers.

The news should come as no surprise to anyone watching movement in the two national consortia developing new standardized tests. In Georgia, it came down to cost — PARCC’s $29.50 per student price tag is significantly more than the $10 state currently spends.

Now all eyes are on Florida, the fiscal agent for PARCC. As we wrote last week, two of the state’s top elected leaders are urging Florida education officials to leave the assessment consortium. We’ll let our StateImpact colleague John O’Connor take it from here:

Florida [would not be] the first state to withdraw from the group, known as the Partnership for the Assessment of Readiness for College and Careers, or PARCC. But Florida is the most significant state so far.

That’s because Florida is managing the money for the new test, which is tied to Common Core State Standards fully adopted by 45 states and the District of Columbia. Florida is also a national trendsetter in education policies, such as evaluating teachers based, in part, on test scores and assigning schools and districts A through F letter grades for their performance.

Florida’s potential departure means other states might follow — and whether enough states will remain to allow PARCC to finish its work. PARCC is funded with a $186 million federal grant, which requires at least 15 states remain PARCC members.

“I don’t think any single state is going to make or break the PARCC project,” said Mitchell Chester, Massachusetts Commissioner of Elementary and Secondary Education and chairman of PARCC. “It doesn’t surprise me that there are states that are questioning their commitment.”

Already Alabama, North Dakota and Pennsylvania have left the consortium. Oklahoma plans to design its own test, and Indiana isn’t participating in PARCC governing board meetings right now. State education officials say they’re waiting until after a mandatory legislative review of the Common Core academic standards.

That brings the number of states participating in PARCC down to 18 plus the District of Columbia.

“I don’t yet think we’re seeing people leaving PARCC in droves,” Porter-Magee told StateImpact Florida. “My assumption is it will be quite low. I assume people will continue to use PARCC.”

That tracks with what Terry Spradlin, the education policy director at Indiana University’s Center for Education and Evaluation Policy, told us last week — even if states leave, they may eventually come back later.

“Some states, rightfully, just want to see the finished product,” he says.