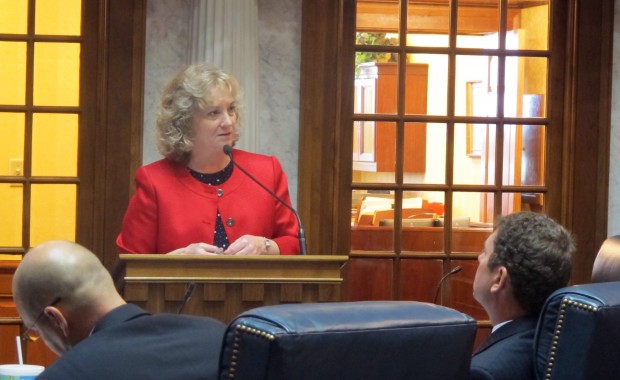 Superintendent of Public Instruction Glenda Ritz explains her vision for Indiana's next test to a panel of state lawmakers tasked with reviewing academic standards.

State Superintendent Glenda Ritz is no fan of high stakes tests. A former library media specialist in Indianapolis’ Washington Township, she campaigned against the IREAD-3, the state’s literacy exam for third graders, saying a pass/fail test was too harsh for 8-year-olds.

On Tuesday, she told a panel of state lawmakers tasked with reviewing the Common Core education standards that she’d like to see an adaptive test replace the ISTEP+ in two years.

“An adaptive model has a huge bank of questions,” Ritz says. “If you get an answer wrong in reading, it gives you an easier reading level question.”

Ritz says most people don’t realize the state’s current assessment, the ISTEP+, is one test: One big, long test.

But instead of giving the ISTEP+ as an adaptive test, Ritz says the state administers it by grade level.

Ritz also says she wishes the word “test” and “assessment” weren’t synonymous in Indiana. She says using the terms interchangeably obscures the fact that educators are always assessing students. She told lawmakers teachers know which students will pass the ISTEP+ and which students will fail before the test is ever administered.

But Rep. Bob Behning, R-Indianapolis, who chairs the House Education Committee, pushed back against that idea.

“You can validate year over year, but I’ve never hear of any test that can use fall versus spring to statistically validate that test,” he told the superintendent.