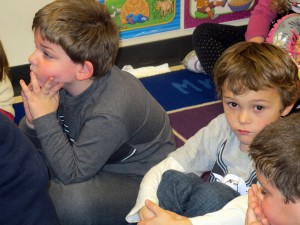 Kindergarten and first grade students are already being taught using the Common Core, but rollout of the standards in other grades has been halted until Indiana makes a decision on assessments.

A complex Common Core ‘pause’ proposal that passed the General Assembly in April will keep state academic standards in Indiana classrooms for at least another year.

Schools have been ramping up for the new, nationally-crafted academic standards since Indiana adopted them in 2010. After rolling out the Common Core in kindergarten and first grade, second grade teachers were to make the switch this year. Now second grade implementation has been put on hold until it’s clear what tests Indiana students will take in 2015-16.

Indiana and 20 other states currently participate in the Partnership for Assessment of Readiness for College and Careers, one of two consortia developing Common-Core aligned tests. (The other consortium is Smarter Balanced.) Those tests are due out in 2014-15.

But even if those tests are ready on time, Indiana students won’t take them. That’s because the same legislation that paused Common Core rollout also leaves Indiana’s current assessment, the ISTEP, in place through the 2015 biennium. The law also changes the rules for Indiana’s PARCC participation.

That’s what I’ll be watching in D.C. today during the quarterly meeting of the PARCC governing board, on which Superintendent Glenda Ritz currently sits. This is the first time the board has met since state lawmakers paused Common Core implementation in Indiana.

Here are five things to know about PARCC.