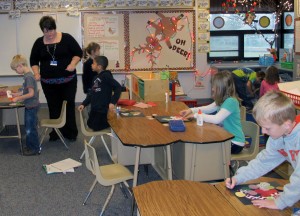 A proposal to withdraw Indiana from the Common Core — a nationally-crafted set of academic standards already adopted in 45 other states and the District of Columbia — will get a lengthy hearing before the Senate Education Committee Wednesday.

Indianapolis Republican Scott Schneider wants the state to opt out of the new academic standards, saying in a statement he’s worried the Common Core will be “a significant step backward from the nationally recognized education standards Indiana previously had in English and math.”

Which begs the question: How are the Common Core State Standards different than what Indiana has now? Not very, says Kathleen Porter-Magee, a fellow at the Thomas B. Fordham Institute, an education policy think tank that advocates generally for vouchers, charters and the Common Core.

“In Indiana, probably more so in most states, there’s more overlap than there is difference,” says Porter-Magee. “A lot of the essential content that was outlined in the Indiana standards exists in the Common Core as well.”

Core Questions: What Do You Want to Know About The Common Core?

But she told StateImpact that’s where Indiana might want to take a lesson from Massachusetts, a state recognized for strong academic standards that has also adopted the Common Core:

[Massachusetts] didn’t want to lose some of the things that were unique to their own standards. So they did make some modifications to the Common Core standards when they adopted them, including for example adding in a list of recommended texts at various grade levels — which Indiana had as well — and they added those into the Common Core standards. Now the Massachusetts adoption of the Common Core has been supplemented in a very deliberate way. I think that if people are really serious about getting standards quality right, some of that content could be very deliberately woven in and the standards could be even stronger than they were.

Concern about the Common Core weakening Indiana’s standards isn’t the only reason for opposition. Though former Republican State Superintendent Tony Bennett pushed for Indiana to adopt the standards in 2010, some members of his party say the Common Core has become too entwined in the Obama administration’s Race to the Top program.

Bennett remained confident on his last day in office that the education overhaul he pushed with former Gov. Mitch Daniels wouldn’t be undone. But Indiana University professor Ashlyn Nelson isn’t so sure.

“Republican support for the Common Core is quite split,” says Nelson, who studies education policy at School of Public and Environmental Affairs. “We could, with a supermajority in the state legislature, see a reject of the Common Core standards.”

We’ve pulled together a quick primer on the 2010 Fordham report grading state standards against the Common Core.

Got a question about the Common Core? We’re collaborating with our StateImpact partners in Florida and Ohio to find answers. Submit your question to indiana@stateimpact.org with “Core Questions” in the subject line.