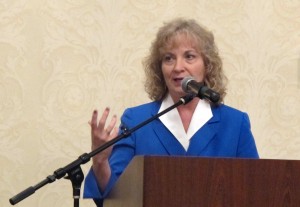 After state lawmakers passed a complex bill pausing Common Core rollout in Indiana, Supt. Glenda Ritz says it was up to her office to decide what academic standards second grade teachers would use in the fall.

Kindergarten and first grade teachers in Indiana are already teaching the Common Core, a set of nationally-crafted academic standards adopted by 45 states and the District of Columbia. Second grade teachers were to make the switch during the 2013-14 school year.

But guidance from the Indiana Department of Education issued last month says teachers in every grade except K-1 should continue teaching the old Indiana academic standards in tandem with the Common Core.

“Implementation-wise, really the only decision that I made — and I did make it, and I take responsibility for it — is that Grade Two will not be implementing fully Common Core,” Ritz said Tuesday, speaking at a Indiana Youth Institute conference for postsecondary school counselors. “The reason for that is very clear because we won’t have an assessment for them when they’re third graders. I refuse to not align standards and assessments for the little ones.”

Earlier in the day a handful of teachers affiliated with the education advocacy group Stand for Children invited a half-dozen reporters to Ritz’s statehouse office, urging the state superintendent to allow implementation of the Common Core to continue.

At the time, the superintendent was speaking at an eLearning conference in Lafayette. 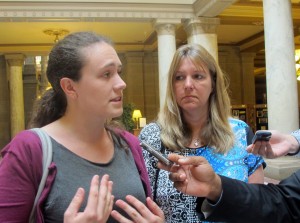 Teachers affiliated with Indiana Stand For Children delivered a letter to the Department of Education Tuesday urging Supt. Glenda Ritz not to pause Common Core implementation.

“There’s been so much back and forth of will Glenda Ritz go this way, will the legislators do this, that I think teachers and principals are confused,” says Christina Lear, an English teacher at Herron High School in Indianapolis who signed the letter.

IDOE spokesman David Galvin says Stand for Children didn’t tell his office the teachers would be delivering a letter.*

“We really want this conversation to be had, but we want to have it around the table instead of through the media,” Galvin told StateImpact.

Galvin says Ritz campaigned on the promise of having honest dialogue about education policy in Indiana. He sees the pending legislative review of the Common Core as one way for the public to weigh in.

“It is a discussion that needs to be had around the state, and the legislature has seen a way to facilitate that with the town hall meeting that we have to set up,” Galvin says.

Why The ‘Pause’ Is Creating Confusion In Second Grade

At issue is whether language in the Common Core pause legislation actually requires second grade teachers to continue teaching Indiana Academic Standards next year. That’s what the IDOE instructed schools to do in a memo dated May 24:

We know many of you have followed — or exceeded — the place of previous standards transition guidance issued by the IDOE since the adoption of the Common Core State Standards (CCSS) in August 2010 by the State Board of Education. You have acquired professional development on the new standards and made significant shifts in your teaching.

HEA 1427 interupts the CCSS transition timeline. For the 2013-14 school year, 2nd grade students should be taught Indiana Academic Standards as well as the CCSS in English/Language Arts and mathematics because students must be prepared to take the ISTEP+ exam on both sets of standards in grade 3. Per HEA 1427, ISTEP+ remains in place through the 2014-15 school year. [Emphasis added.]

That bolded section is the part of the IDOE’s guidance with which Stand for Children and other pro-Common Core groups disagree.

“The review process is going to be good for Common Core,” says Stand for Children spokesman Jay Kenworthy. “It’s going to dispel a lot of myths, it’s going to prove it’s a good set of standards, but we felt we couldn’t let this instruction from DOE go by unchallenged because we do think it’s above what the law stated.”

Kenworthy says the second grade teachers he’s talked to are worried about teaching concepts in the Indiana Academic Standards that would be unfamiliar to students who’ve only been taught under the Common Core standards until now.

But Ritz says until the State Board of Education settles the standards questions — per HB 1427, that has to happen by July 2014 — she’d rather prepare students for the assessments she knows they’ll take: the ISTEP+ exams.

“It’s certainly not fair to anybody to not be able to take a test on the standards that you receive,” she says.

UPDATE, 5:15 p.m. EST: In an email, Kenworthy said Stand For Children originally intended to present Ritz with the letter at the June 5 State Board of Education meeting, which has been postponed until June 24. Kenworthy also says attempts to arrange a meeting with Ritz’s office have been unsuccessful.