House Speaker Brian Bosma, R-Indianapolis, reviews a document while chairing the meeting of the Indiana House of Representatives on the final day of the General Assembly's 2013 session.

A bill halting the rollout of the nationally-crafted Common Core standards — among other things — and a proposal to expand the state’s private school voucher program both await votes from Indiana lawmakers (as of post time) as the General Assembly works to wrap up its 2013 session early.

The General Assembly is also expected to vote on a draft of the state’s biennial budget sometime late Friday night.

On the final day of the 2013 session, here’s a look back the most widely read StateImpact posts. We sorted them here by issue: 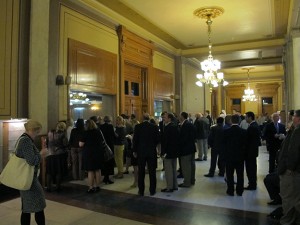 Observers gather outside the Indiana House chambers on the final day of the 2013 session. 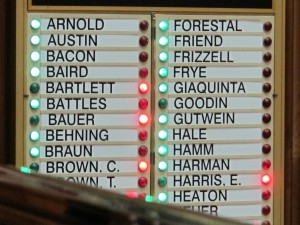 The electronic roll call board in the Indiana House chamber displays lawmakers' votes.

And A Few More For Good Measure