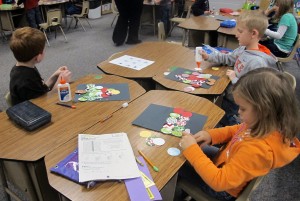 First graders at Rockville Elementary School complete a craft project. The compulsory attendance age in Indiana is 7, so not all students attend kindergarten before starting school.

When it comes to when Indiana students should start school, Superintendent-elect Glenda Ritz will have at least one ally on the State Board of Education: Tony Walker suggested Wednesday it’s time for Indiana to revisit the compulsory attendance age.

“Probably everyone in the room wouldn’t have a 5-year-old son or grandchild that they wouldn’t have in kindergarten somewhere, and I think that should be standard for this state,” Walker said. “The idea that you don’t have to start school until you’re 7 years old is just behind the times.”

That squares with what Ritz said repeatedly on the campaign trail. She says too many Indiana first graders start school unprepared to learn because they haven’t been to kindergarten. Currently, Indiana kids don’t have to attend school until the year they turn 7.

“So when we get a young child in first grade that has not been to kindergarten, and has not been to preschool, then they are two years behind being successful as a first grader,” Ritz told StateImpact in October. “Typically, and rightly so, that youngster is normally put back in kindergarten to get the basics, to even know the letters.”

But she says those kids are always behind — especially when it’s time to take the statewide third grade reading test, which is required to move on to fourth grade.

Walker, a Gary attorney who represents the First Congressional District on the state board, says he’s hearing the same thing from educators in his area. Teachers are spending first, second, even third grade trying to catch students up, he told other board members Wednesday.

“I just wanted to prompt the board as well as the Department of Education to start taking a look at this and maybe have some consideration to moving toward to kindergarten for all 5-year-olds,” Walker said.

Walker’s comments didn’t generate any discussion. But Walker, an appointee of Gov. Mitch Daniels whose term extends to 2014, could be an ally if Ritz wants to pursue fully-funded kindergarten.

The Biggest Question: How To Pay For Kindergarten

“If we were to make that leap and say we were going to lower the compulsory attendance age, that has a fiscal impact,” Bennett said during a forum last fall. “Because that means as opposed to the full-day kindergarten grant, we would fund kindergarten as a full student.”

“We should lower the age to 5, and we should have preschool learning programs for students, especially in high risk need, and we should be focused on reading.”
—Superintendent-elect Glenda Ritz

Still, how much schools are getting per kindergartener is less than the per-pupil funding amount for other grades, says Terry Spradlin, a professor at Indiana University’s Center for Evaluation and Education Policy.

“At some point, the legislature should probably just put the kid in the formula to make funding issues a little more transparent and simplistic” Spradlin told StateImpact last year. “This grant requires every two years that the legislature step up and recommit to the funding, versus it being part of the annual funding formula that gets tweaked a little bit each year.”