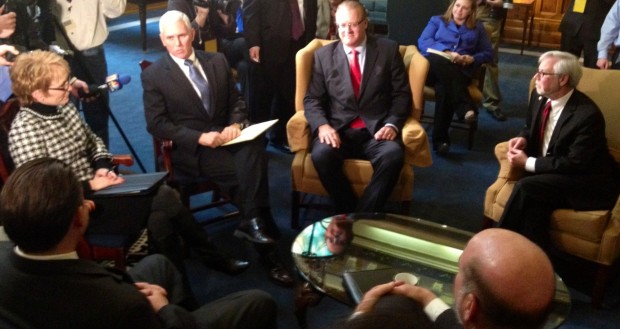 Gov. Mike Pence (top left) meets with leaders from both chambers of the Indiana General Assembly on his first day in office.

The GOP leaders’ exclusion of a 10 percent income tax cut from the two-year spending plan has already become a sticking point with Gov. Mike Pence, who said he was “disappointed” in the proposal.

But the two sides’ K-12 budgets are not as far apart as the friction over the tax cut suggests.

Put another way, House Republicans and Gov. Pence are $80 million apart on elementary and secondary education — this, as their respective budget proposals call for upwards of $7 billion in spending on Indiana’s public schools in each of the next two fiscal years.

That said, we’ve pointed out funding for Indiana schools — the state budget’s single-biggest line item — is likely to play a role in the debate over whether the state can afford a tax cut.

Pence says the state can afford an income tax cut and education funding increases. He says in a statement:

Despite having the largest budget surplus in history, this House budget increases spending without giving hardworking Hoosiers one cent of new tax relief. As our administration’s budget clearly showed, we can afford to do both. Indiana can fund our priorities including increases for roads and schools and reduce the personal income tax. Since we can reduce taxes on every Hoosier, we should.

As the AP reports:

Republican House Ways and Means Chairman Tim Brown says the House hasn’t ruled out the Pence tax cut. But approving it would mean slashing priorities the House GOP pays for in its plan.

The state’s largest teachers union, the Indiana State Teachers Association, posted a call to its members on Friday asking them to advocate for larger increases in K-12 funding than both Pence and the House GOP are proposing.