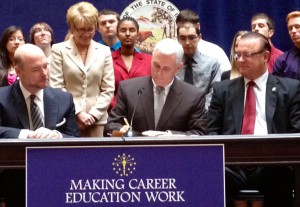 The first bill creates regional Works Councils that will work with the private sector and educational organizations to identify needs in the area’s workforce, create partnerships between schools and businesses for internships and apprenticeships and boost career and vocational ed in high schools.

The other creates a state career council to bring all of the state’s job creation and education efforts together at one table.

Pence says the combined initiatives will help ensure schools work just as well for students who want a job out of high school as those who attend college.

“With more relevant career and technical education in our local schools, we’ll encourage more Hoosiers to stay in school and finish school and set more of our kids on a path to success in high school and beyond,” he said Monday.

From Dan Carden of The Times of Northwest Indiana: