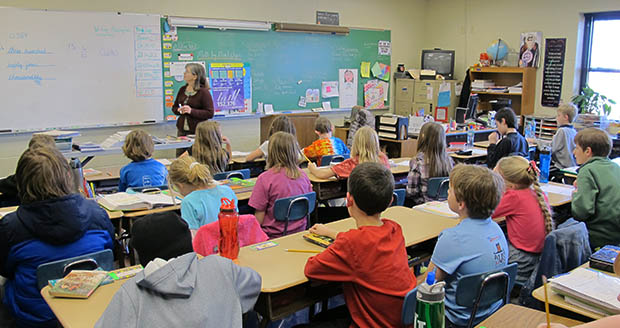 One day after the state’s highest court gave its blessing to Indiana’s private school voucher initiative, lawmakers altered course in their attempt to expand the program’s eligibility requirements.

Dropping a provision that would’ve allowed students entering kindergarten to qualify for the program, the Indiana Senate Education Committee voted 8-4 Wednesday on an amendment that would make students attending F schools eligible for vouchers.

But supporters of the original expansion proposal had also hoped to broaden eligibility requirements for children in military families and foster care — provisions Kenley’s amendment dropped.

By adding the provision allowing students living in attendance zones of schools that received F’s under the state’s rating system, the amended bill would make Indiana’s voucher program look more like initiatives in Ohio or Louisiana. There, students attending low-performing public schools are already eligible for vouchers.

Already, the Friedman Foundation for Educational Choice estimates more than 530,000 students — nearly half of Indiana’s student population — are eligible for vouchers. Roughly 9,300 signed up for the program this year.

Rep. Bob Behning, R-Indianapolis, who heads the House’s Education Committee and authored the original HB 1003, told IPBS statehouse reporter Brandon Smith after the vote lawmakers will have to work out issues in the amended bill.

“A lot of the language that he deleted was the governor’s language,” Behning said. “We’ll have to see where the governor is and how passionate he is and whether he can convince people that his will should prevail.”

A spokesperson for Gov. Mike Pence issued a statement after the vote saying the administration “looks forward to continuing to work through the legislative process.”

The amended bill — which Kenley says comes with a “significantly lower” price tage than the original — now moves on to the Indiana Senate Tax & Fiscal Policy Committee.