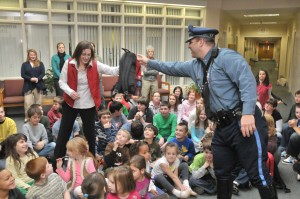 An Indiana House lawmaker has proposed requiring every school in the state to employ a staff member who carries a gun, whether it’s a police officer or a trained teacher.

The original bill, as it passed the Senate, encouraged, but did not mandate, Indiana schools to hire school resource officers — trained law enforcement who receive additional training for the school environment.

After Tuesday’s amendment, the bill creates a new position — school protection officer — and requires each school to have one.

The school protection officer would be required to carry a gun but does not need to be a law enforcement officer. Existing school staff, including principals or teachers, could become the school’s protection officer by going through training, though what that training involves isn’t specified in the bill.

“With Sandy Hook, with Virginia Tech, with Columbine — those were places that were gun-free zones,” said Jim Lucas, R-Seymour, who authored the amendment, “and we see the results of that. This bill is trying to prevent that.”

Rep. Vernon Smith, D-Gary, says Lucas’ argument has some validity, but he doesn’t think teachers or principals should be the ones with the guns.

“I served as a principal for 20 years and I certainly wouldn’t have wanted to have possession of a gun,” Smith said.

The bill now heads for the House Ways and Means committee.