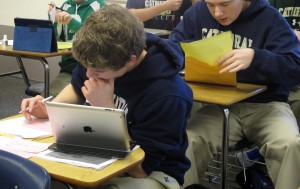 Backers of a proposal to expand Indiana’s school voucher program fielded some tough questions during the a Senate Education Committee hearing Wednesday afternoon.

HB 1003 increases the maximum voucher amount from $4,500 to $5,500 and also makes more student eligible for the program, including kindergarteners who receive scholarships from other organizations to attend private school.

Sen. Luke Kenley, who voted for the initial voucher law in 2011, questioned the bill’s author, Rep. Bob Behning, whether the proposal would change the originally-envisioned spirit of the program.

“It looks like we’re giving up on the one-year, attend-public-school requirement. Is that right?” Kenley asked Behning, who chairs the House Education Committee.

“The one year is still required unless you start in kindergarten,” Behning replied.

“We said, ‘OK, if you attend public school for a year — and that starts with the first grade — then if the family’s not satisfied, then no questions asked they could move the child to a private school and they could get the voucher.'”
—Sen. Luke Kenley, R-Noblesville

Kenley asked Behning to explain how the kindergarten eligibility component of the new voucher law would work.

Behning replied that students would be eligible so long as their families met income guidelines or qualified because they were military veterans, foster parents or special education students.

“So we’re completely eliminating the requirement that they try out the public schools, which is the condition we actually got the votes to pass that bill the last time?” Kenley asked.

“In an effort to get the votes, we did have to compromise,” Behning answered. “You may not be aware because you were not in the House that’s not the way that bill was introduced. The intent has always been — I am an advocate of choice and believe parents are the best people who can decide what’s the best interest of their children.”

Kenley also questioned whether it was wise to proceed with voucher expansion given that the Indiana Supreme Court still hasn’t ruled on the current law.

As we’ve reported, voucher supporters hope changes in HB 1003 will make it easier for new private schools to open in Indiana.

State education officials will not limit the number of scholarships they make available next year. Still skeptics of voucher expansion say it’s unlikely that space in the Choice Scholarship Program will run short any time soon.

We’ll have more from Wednesday’s hearing in a later post.