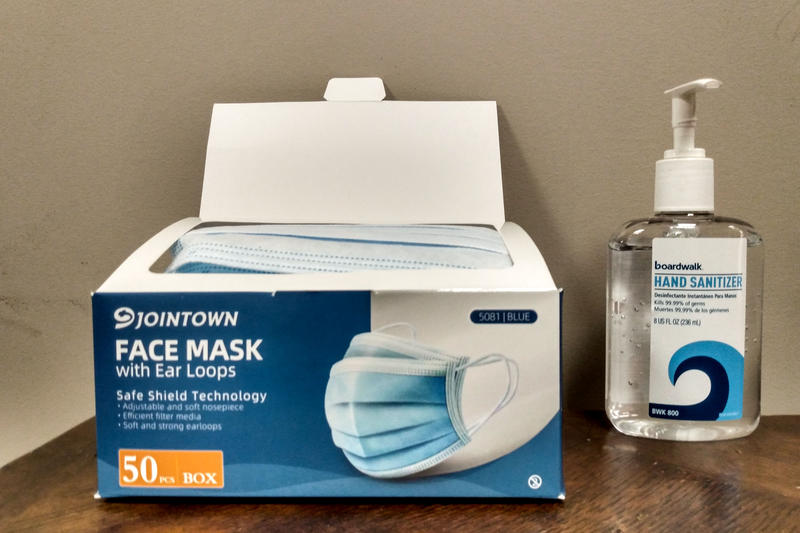 Many businesses are offering hand sanitizer and disposable face masks at their entrances. (Lauren Chapman/IPB News)

The Indiana State Department of Health reported 67 additional confirmed deaths over the last week, bringing the state’s total to 2,567. The state announced more than 51,000 total confirmed cases, with more than 564,000 Hoosiers tested.

The Small Business Administration released data Monday on companies and other groups that received a loan through the Paycheck Protection Program (PPP).

In Indiana, almost 12,000 PPP loans for more than $150,000 were given out to companies including candy producer Albanese Confectionery and auto racing company Andretti Autosport.

Most PPP loans handed out to Hoosier businesses were for less than $150,000. The smallest loan was for $52.

The Small Business Administration released national data on who received a Paycheck Protection Program (PPP) loan through June. But the lack of detailed information included for smaller loans limits the ability to hold those businesses and organizations accountable.

U.S. Rep. Jim Banks (R-Columbia City) said while it’s important to understand where the money went, he has mixed feelings about the transparency of who received a PPP loan.

“We had a number of, immediately upon releasing the list of recipients, you had especially in the charged environment of social media, you had a lot of businesses that were targeted for receiving the PPP loans,” he said.

Senator Young Wants Next Federal Relief Package To Be 'Targeted'

U.S. Sen. Todd Young (R-Ind.) said he wants the federal government’s next round of COVID-19 relief to be “targeted” at those who need help most.

Young is critical of the package passed by the U.S. House of Representatives, a $3 trillion proposal dubbed the HEROES Act. That legislation includes another direct payment to Americans, hazard pay for essential workers, more money to boost COVID testing and relief for state and local governments.

Young said Congress needs to evaluate the economic picture and more finely target its relief before passing another round of funding.

“We still have a lot of underutilized resources – including money in the Paycheck Protection Program – that have not yet been drawn down,” Young said.

Summer Heat To Blame For Reduced COVID-19 Testing In Indiana

If you’ve had trouble lately getting an appointment for a COVID-19 test – or if your appointment was abruptly cancelled – it’s likely the heat is to blame.

The number of tests reported by the state has been down the last couple of weeks. And State Health Commissioner Dr. Kris Box said the summer heat is the primary reason.

Many of the state’s testing sites – principally those run by OptumServe – are either outdoors or in places without air conditioning, like state armories. And Box said testing site employees can’t be put at risk.

“Once that heat gets up to be about 78 to 80 [degrees] and they’re in their personal protective equipment, they will shut down," Box said. "And unfortunately, in order to go as long as they can, that ends up being a last-minute decision.”

Indiana Shutting Down PPE Marketplace, Replacing It With Directory For Businesses

The Indiana Economic Development Corporation is shutting down its PPE marketplace for small businesses and replacing it with a directory to connect Hoosiers with Indiana companies that sell the safety gear.

IEDC Chief of Staff Luke Bosso said the marketplace fulfilled more than 30,000 orders for personal protective equipment, at no cost, since its May launch.

“The PPE directory will provide a long-term, reliable and credible solution for businesses and nonprofits looking to procure PPE,” Bosso said.

The U.S. Census Bureau will begin visiting households in Indiana and other states that have not yet responded to the 2020 Census.

Starting the week of July 20, census takers will begin interviewing people in southern Indiana and in areas managed by U.S. Census offices in:

In-person visits will begin across the rest of the country in August, with a goal of finishing no later than Oct. 31.

Indiana officials say the state will soon begin shipping personal protective equipment to Hoosier schools as they prepare to reopen for in-person classes.

The Indiana Economic Development Corporation is helping coordinate shipments, which will begin as soon as Monday. IEDC Chief of Staff Luke Bosso said schools will receive more than one reusable, cloth face mask for every student.

Go to school in person this fall or leave the country. That's the message Immigration and Customs Enforcement (ICE) is sending to international college students with a new policy announced Monday, and it's leaving students scrambling to figure out their options.

The ICE policy says international students could face "immigration consequences" – including deportation – if they attend colleges only offering online coursework this fall instead of in-person classes. The Trump administration plans to issue it as what's known as a temporary final rule, which is legally binding.

Many colleges have opted for a sort of hybrid approach, but one international graduate student in Indiana says the announcement – and lack of clarity for what it means for his entirely online schedule this fall – came as a complete shock. We agreed not to use his names in this story due to concerns for their visa status.

"It's very scary, because I wasn't really expecting this to happen," he said.

The policy unveiled this week says international students cannot take only online classes at their colleges this fall. If they do, they run the risk of losing their visa status.

Now, Indiana University and Purdue University are supporting the lawsuit challenging the order. MIT and Harvard filed the suit earlier this week, seeking a temporary restraining order to prevent enforcement of the policy.

The Indiana Governor’s Workforce Cabinet says it’s expanding the state’s Next Level Jobs program with $37 million from the CARES Act. It’s a major part of the state’s strategy to help Hoosiers recover from pandemic-related job losses.

Next Level Jobs is made up of two programs: Workforce Learning Grants and Employer Training Grants. As part of the rapid recovery initiative, the state is making them available to more people and increasing the amount they can get under each grant.