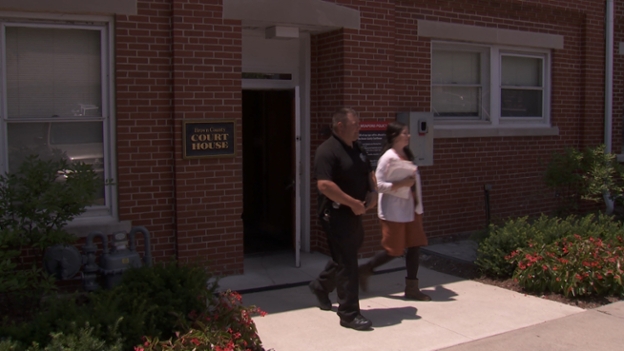 The owner of a Brown County farm filed a restraining order against a Bloomington activist Monday.

Sarah Dye told Judge Frank Nardi that Thomas Westgard is engaged in an "ongoing, routine effort of harrassment" against her.

Dye is a vendor at the Bloomington Farmer's Market. Published reports surfaced in May linking her to white supremacist Nolan Brewer. Brewer was convicted was convicted of vandalizing a synagogue in Carmel. He told FBI agents he met with Dye and that she shared similar views.

Westgard says he doesn't think Dye’s case against him will hold up.

Dye turned down WTIU's request for an interview as she left the courthouse, escorted by a baliff.

During the hearing she accused Westgard of flying a drone over her home and being a member of the "Antifa" group "Hoosier Anti-Racist Movement."

Westgard says he's not a member of that group and has never been to Dye's home.

Westgard told the judge Dye went to his Facebook page and found posts protesting her alleged white supremacist tied, but he never sent her any threatening messages.

Asked if Dye has a right to participate in the farmer's market while harboring such extreme views, Westgard responded, "If she can find enough Nazis to buy her stuff she can sell all she wants."

CORRECTION: The headline of this post has been updated to reflect the status of the restraining order request.

The judge says he will issue his decision on the the restraining order by mail.