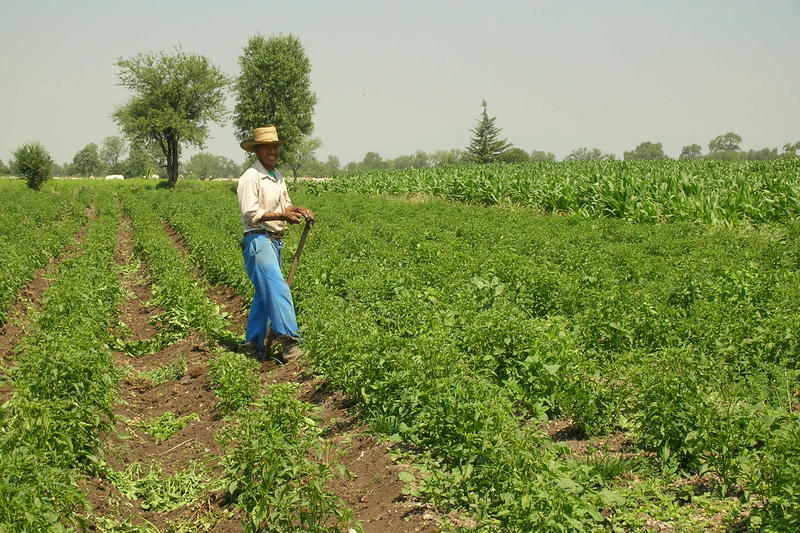 A farmer in a field of chili plants in Mexico that have been irrigated using wastewater. (The Sustainable Sanitation Alliance/Wikimedia Commons)

Firefighting foams with the toxic chemicals PFAS have contaminated water at military bases around the country. But less is known about how they find their way into rural water supplies — like private wells. Two Indiana universities have received grants to study that question.

Indiana University and Purdue University each got more than $1.5 million in federal grants to study PFAS in rural water. High levels of PFAS have been linked to health problems with the immune system, infant birth weights, and — in some cases — cancer.

The chemicals are found in so many of our everyday products that they even end up in our wastewater. Purdue agronomy professor Linda Lee and her team will be looking into whether treated wastewater used as fertilizer on farms is significantly contributing to PFAS pollution in water.

“Because there's so many other sources that can contribute so much more so that other things are barely a blip on the radar. So we, you know, we want to fill that data gap," she said.

Indiana University is tasked with creating a way to predict PFAS levels in private drinking water wells in rural areas.

Jackie MacDonald Gibson is leading this research and chairs IU’s Department of Environmental and Occupational Health. She previously studied how PFAS contamination from a manufacturing facility in North Carolina made its way into private wells nearby.

“You'd have one well with very high levels of these contaminants and there’d be one, you know, next door that had nothing detectable in it," Gibson said.

Gibson said, even with only one source, it was hard to figure out which drinking water wells would be most at risk. She said her team’s goal is to figure out where to look even if you have multiple sources of contamination.

Gibson and Lee both said they were excited to see how their universities might collaborate.

"By coming together, we'll be able to cover a lot more territory," Lee said.