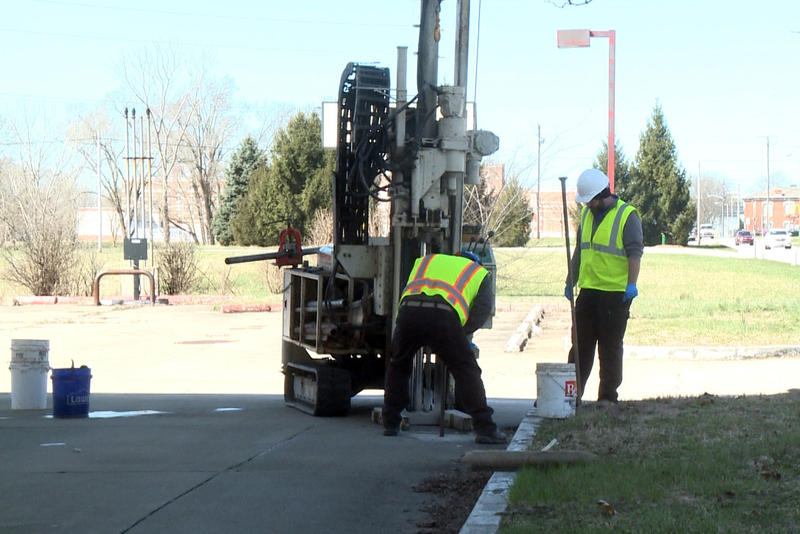 Workers at Creek Run Environmental take a soil sample at a gas station site being cleaned up in Columbus. Creek Run is not involved in the current lawsuit. (WFIU/WTIU News File)

The Indiana Department of Environmental Management is facing a class action lawsuit over who can get reimbursed for cleaning up leaking underground gas tanks through a state fund.

The environmental engineering firm Golars, some of the gas station owners it serves, and the United States Small Business Owners Association filed suit against the agency last week.

Among other things, they say IDEM refuses to reimburse companies that clean up contamination at gas stations if the current owner doesn’t agree to accept liability. Bill Wagner is an attorney representing the plaintiffs. He says two years ago the agency’s Office of Environmental Adjudication ruled the policy was unfair to the current gas station owners.

Meanwhile, the company that’s cleaning up many of these sites, Golars, says IDEM hasn’t reimbursed it for more than $800,000 in cleanup costs from the Excess Liability Trust Fund.

The plaintiffs also say IDEM has forced some consultants to stop cleanup, leaving high levels of the cancer-causing chemical benzene in the soil or groundwater.

“I understand part of the argument is that they want to make sure the fund is properly protected. But I don't think the way you go about doing that is shortchanging cleanup,” Wagner says.

IDEM has expressed concerns in the past that environmental consultants like Golars are taking advantage of the Excess Liability Trust Fund. In 2017, the average cost for cleaning up a tank leak in Indiana was more than three times the national average.

At a state Senate hearing last year, IDEM officials said that if money in the fund gets too low, the state will only be able to afford to pay for cleanups of tanks that pose the biggest risk to human health and the environment.

READ MORE: State Money To Clean Up Gasoline Leaks In Indiana Is At Risk: Here’s Why

Plaintiffs in the suit are hoping it will force IDEM to follow the law and reimburse consultants for unpaid claims. IDEM says it doesn’t comment on pending litigation.