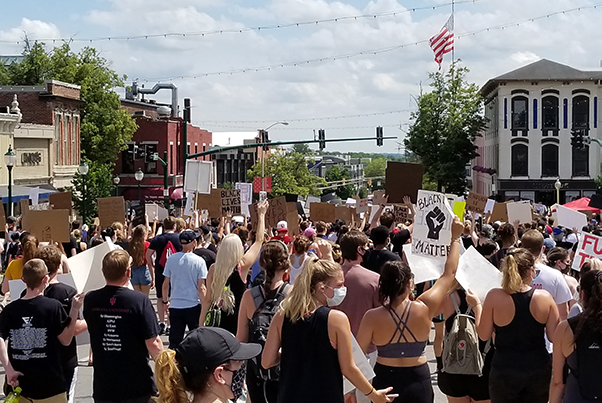 The community's call for law enforcement reform was most notably made at the Enough Is Enough protest in early June. (Payton Knobeloch)

This comes about a month after community members spoke out against the sheriff’s department proposal to hire two new deputies the day before the “Enough Is Enough” protest in Bloomington on June 5.

"The importance of this meeting is for us to listen and educate ourselves on how we as council members can work within our framework to inspire meaningful change in county government," council president Eric Spoonmore said.

The main topic of discussion was figuring out new ways to reallocate funds from the law enforcement budget and into other social services.

“They think they’re job is to enforce versus to support public safety," Davidson said. "The amount of resources they squander in such kind of behavior is horrifying to me."

Several participants in the town hall said certain tasks should be handled by social service workers instead of law enforcement officers.

Resident Jean Capler said it would be better for everyone’s safety if mediation specialists were dispatched to certain emergencies so it doesn't become violent.

“I would like to see us at least consider something along the lines of a community crisis response team that could be sent out by a call to 911," Capler said.

Another key issue in the discussion centered around how law enforcement officers are trained.

Domonique says she wants to know what kind of procedures officers go through and who is teaching these practices. She says this could be part of the nationwide problem concerning police brutality.

The county council says this meeting was about listening to the community’s ideas and it will consider them in making future policy decisions moving forward.

"It's very easy to think we just had another meeting and this has no impact, but it's my belief that the information shared went well beyond this meeting and to other reaches of county government," council member Trent Deckard said.

President Eric Spoonmore said the council will soon be considering the county's 2021 budget.

"Offices and departments are currently preparing their budgets for our council's consideration," Spoonmore said. "I encourage everyone to let your elected officials know about what tax dollars you would like to see go toward public safety."

Spoonmore said budget discussions will begin in September and public comment on the county budget is scheduled for a meeting on September 29. He said the final budget approval is set for October 14.

"Progress is a product of democracy and tonight was what democracy looks like," Spoonmore said.

Spoonmore said any individual with an idea or wishes to know more information is free to email council members through the county website's directory.