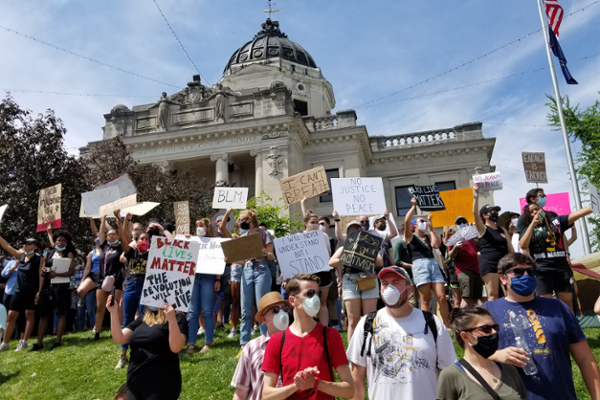 Over the past several weeks protesters call to defund the police, but Tuesday the Monroe County Council heard from the other side of the community. (Payton Knobeloch)

In late June during a law enforcement town hall, some community members urged the council to defund the department.

"The majority of the community doesn't support any form of defunding the police," Ellettsville resident Zachary Michael said.

Michael said if local officials decide to do so, the community would be stuck with unqualified officers when positions become available.

“You’ll still have candidates, but they won’t be near the quality our community deserves or needs," Michael said. "Who wants to work for a community whose leaders don’t support them? Especially in a job as dangerous as law enforcement.”

Council member Kate Wiltz said in the weeks following the town hall she’s received hundreds of emails from people who support the sheriff’s department and want it fully funded.

She said she agrees that defunding isn’t the answer, but the Monroe County government can’t ignore systemic racism.

“We need to commit to identifying and addressing policies and power structures that are working in favor of white people and creating barriers for black, indigenous and people of color," Wiltz said.

Wiltz said a solution could be creating a community oversight committee that’s made of citizens that closely overlook local law enforcement.

"What we need to do now is work toward reforming how the system looks and operates in the field. Where we interact with people who need services and support them as opposed to an armed response," Wiltz said. "That doesn't mean defunding entirely. That doesn't mean abolishing in my opinion."

Despite the overwhelming support for the police during the meeting, several people mentioned its inefficiencies.

“Our law enforcement did nothing for him because he’s a Black citizen and citizens who are Black and Brown do not get served equally by policing," Ruiz said. "The time to defund and serve our community is now."

Vauhxx Booker is a Black man who says a group of White men assaulted him near Lake Monroe over Fourth of July weekend.

Council president Eric Spoonmore said the county hasn’t considered, nor does it plan to vote on a proposal anytime soon that would defund the sheriff’s department.

“There is no proposal on the table to defund the sheriff’s office at this point. What we’ve done is held a series of meetings where we’ve listened to the public and their input and their ideas for how we can approach this issue," Spoonmore said.

READ MORE: What It Means To ‘Defund The Police’

The council said it will be working with the sheriff’s department in the coming months on the 2021 budget, which the council will formally discuss in September.

"When you have constituents who are concerned, you should be listening," Spoonmore said. "That is the most important factor in my decision-making."