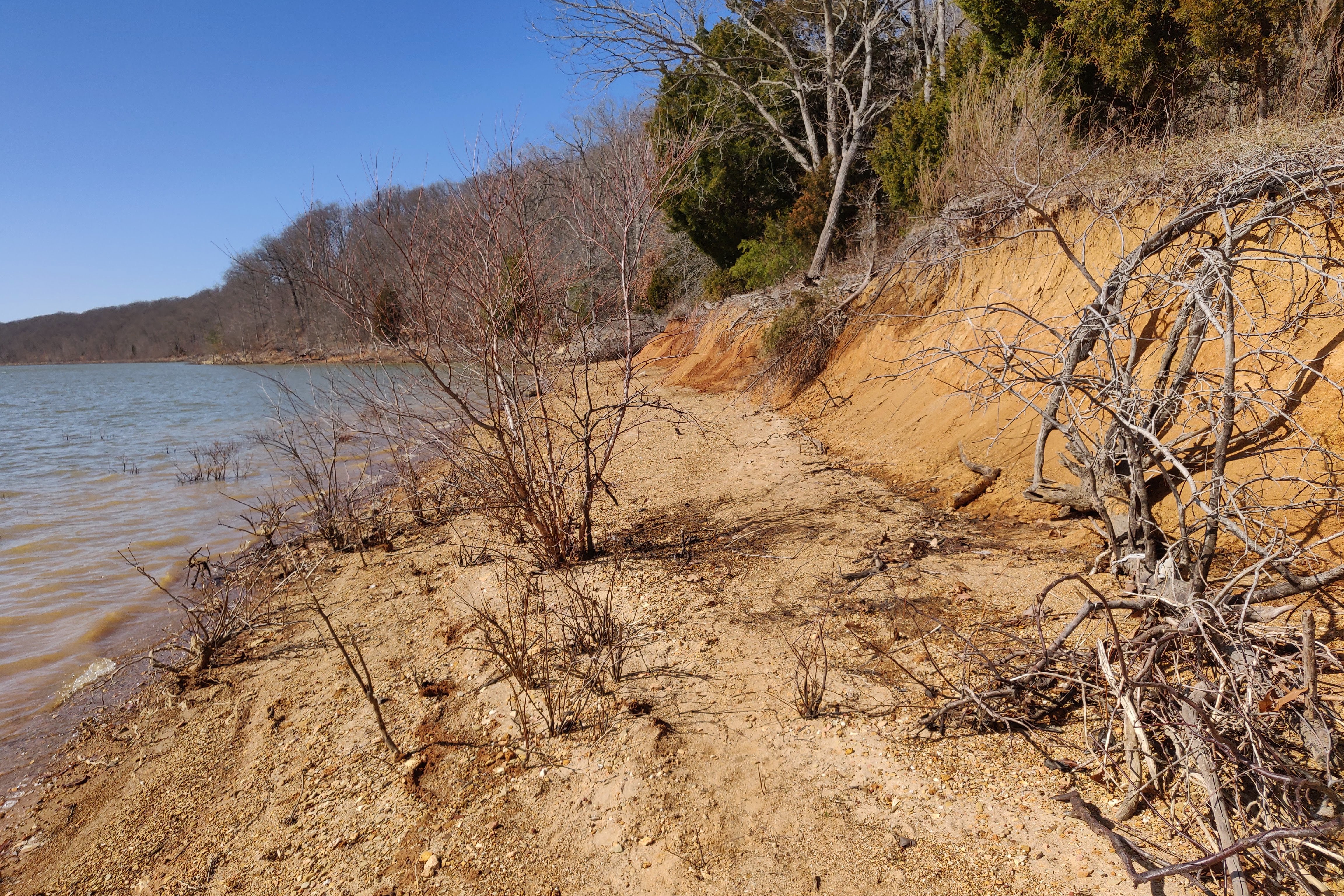 Mitchell-Bruker is a founding member Friends of Lake Monroe. The group was awarded a grant from the state Department of Environmental Management to develop a watershed plan and has contracted Indiana University to measure nutrients, sediments and bacteria.

“Our concerns about sedimentation are more concerns about the nutrients that come in with the sediments,” Mitchell-Bruker says. “So, nutrients like nitrogen and phosphorus that are bound to the sediments, particularly phosphorus, cause enrichment of the water in a way that allows algae to grow quicker … So, we want to reduce the amount of nutrients that are coming into the lake so that we don't get these algae blooms.”

Some experts are concerned once again because the reservoir experienced unusually high water levels this winter. It can lead to more erosion, which is what Mitchell-Bruker expected to find at the end of the peninsula.

“This is typical of some of the erosion that happens along the shoreline that's a result of the very high water levels that occur,” she explained, pointing to orange soil at the water's edge.

“One of the things we're trying to figure out is how much does this erosion contribute to the total sediment load on the lake,” she says. “And some of that can also be as a result of when the water level is high, and you get a lot of boats out there, and there's a lot of wave action that makes it worse. So, we want to try to figure out how that works.”

Lake Monroe can withstand high water levels. In fact, that's why it exists.

The Louisville District of the U.S. Army Corps of Engineers is responsible for maintaining the lake level and controlling flood waters.

Annual water levels are on the rise, and they're testing the lake’s limits. But Corps officials say they're equipped to handle them for now.

“It’s a pretty big project compared to a lot of the other ones. We can handle a lot more floodwaters coming in. Our area doesn't jump up as fast,” says Shannon Phelps, a natural resource park manager for the Corps.

Water levels last summer were unusually high, at times closing the lake's beaches. They were high this winter, too. It's happening more and more.

“In 2012, water actually flowed through the reservoir's uncontrolled spillway,” Phelps says. “Prior to that, it only got close in like 2002. So, in the last 10 years or so we've experienced more flooding than we ever did before. And we've been here since 1965.”

In addition to dealing with the rising water levels, the Corps is also tasked with overseeing some of the lake’s recreational activities.

They are resuming as Indiana reopens amid the coronavirus outbreak.

Phelps sees flooding as a more likely deterrent than COVID-19 to getting people back.

“I don't think we're going to have much of a problem, once things open up, having people come back out. They really enjoy recreating, and I think they kind of tend to think of this as less crowded, less of a chance of catching the virus. Being outside and recreating, even though they're standing there shoulder to shoulder fishing, they don't see that it's the same as going to the store and crowding into Walmart or something,” he says.

“I think we're going to probably have a pretty normal year as long as we don't have water on the beaches or like high water problems. I think visitation will be just fine.”

On Memorial Day, hundreds of people flocked to beaches and other recreational areas after being cooped up for months during the closure.

One of them, Peter Corney, said he and his family were still being cautious.

“We are feeling a little apprehensive,” Corney said. “This is the first time us as a family have been out with lots of people around us. So yeah, we're still trying to keep as far apart from other people as possible. But you know, it is nice to come out and try and enjoy the weather.”

The fun didn't last long. Two weeks later, the beaches were closed due to flooding.

Recreational areas like Fairfax beach are maintained by the Department of Natural Resources, which is also responsible for allocating Lake Monroe’s water.

“The recreational aspect of the lake is important to the department,” says Mark Basch, who heads up its Water Rights & Use Section. “Our focus with this program is just the sale of water from the reservoir, which is a wonderful thing because certainly the water supply is a huge issue, particularly in the Bloomington area. Having this available supply is a great thing.”

Basch says the availability of water for Bloomington and others is secure for now.

“Currently there's only a little over 20 percent of the available supply — of the safe yield of the reservoir — that is spoken for. And the majority of that is actually by the City of Bloomington. So, there's certainly additional supply,” he says.

In addition to Bloomington, the DNR has three other customers: the Indianapolis Power & Light Company, Salt Creek Services, and Eagle Pointe Golf Resort.

“We look at the availability of water from the lake, and certainly, the City of Bloomington being the main user, at least in their current contracts that we have there on the lake,” Basch says. “So, they're certainly concerned about the water quality.”

The city is one of the entities responsible for monitoring water quality. Detailed reports are published annually, and they're available at the city’s website.

But back on the peninsula, Sherry Mitchell-Bruker says protecting water quality is not one agency’s or department’s responsibility — it’s everyone’s.

And making sure we protect the land surrounding the lake is a big part of that.

“It's very important for people who are concerned about lake water quality, and who live in the watershed, to make sure that they're taking care of the land, they keep the soil on the land, and they don't have runoff of any nutrients or chemicals off their property,” she says.