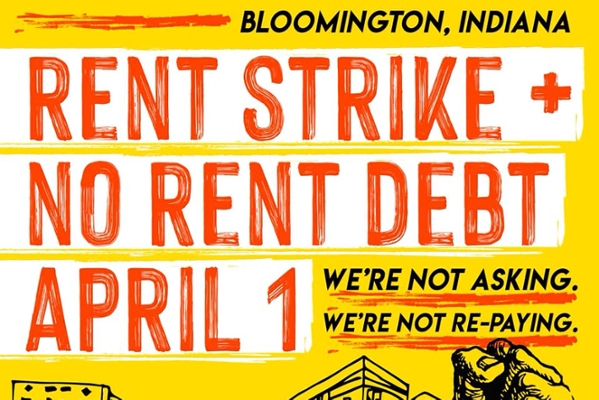 More than 120,000 Hoosiers filed for unemployment in the last week of March, more than doubling claims from the previous week. On April 2, Fred Payne from the Indiana Department of Workforce Development said that number was approaching 150,000.

Many people who had recently lost their jobs or were given reduced income were faced with how to pay rent during the coronavirus crisis.

For two grassroots progressive groups in Monroe County, the response was clear: don’t pay it at all.

“We are talking to people about the fact that many of their neighbors already can’t pay for rent or have not been able to pay for rent in the past, or have been withholding rent from certain landlords in the past without it being an organized effort,” said Michael Simmons, an organizer for the Bloomington Solidarity Network.

The Network describes itself as a volunteer-run organization that advocates for the rights of tenants and workers. It has partnered with pro-communist group For the People - Bloomington to urge local tenants to stop paying rent during the COVID-19 pandemic.

“In normal circumstances, we consider the landlord-tenant relationship to be inherently exploitative,” said Simmons, who is participating in the rent strike. “The only thing that’s changed during this crisis is that it’s opened up a space in which many more people are willing to take the step in standing up for themselves and their neighbors.”

The Bloomington Solidarity Network focuses on property companies which have had issues in the past.  Simmons cited Pendragon Properties, which last year paid the City of Bloomington $750,000 to settle a lawsuit alleging one of its apartment complexes was not up to code.

At the time of publication, Pendragon Properties had not responded to WFIU’s request for comment on the rent strikes.

“If people withhold their rent as an individual, they’re more vulnerable to retaliation from the landlord and to eviction. If people are organized, they’ll have leverage over the landlord,” Simmons said.

“From a management standpoint, [that is] definitely a frustrating statement, because we are willing to help. We’re willing to do a lot of things, if they just communicate with us,” says Hanna Martin, leasing manager for Olympus Properties, a third-party management company that rents residential and commercial properties around Bloomington.

Martin says the company is working with tenants to tailor payment plans appropriate for different financial situations. Several other leasing companies with whom she has spoken are applying similar strategies.

“We had a property put a sign up saying, ‘Rent strike.’ We’ve reached out to them. They’ve not communicated back to us,” Martin said. “I think the only communication back was, ‘People have rights to live places,’ which wasn’t even an accurate response to, ‘How can we help you?’”

She added that the rent strikes don’t account for those relying on income from the properties they rent out.

“I have lots of individual owners who also rely on this income to pay for mortgages. They, too, are needing resources to get past this time,” Martin said.

One rent striker who asked to remain anonymous says they hadn’t collaborated with their neighbors, but it was the social media discussion that encouraged them to strike.

“Why should I be forced to deplete my savings and not be allowed to work simultaneously?” they said. They were laid off from their job at BJ’s Restaurant and Brewhouse last month.

“I doubt they’ll sit well with a rent strike,” they said.

Woodington Management LLC did not respond to multiple requests for comment.

Last month, Gov. Eric Holcomb signed an executive order freezing evictions and foreclosures for the duration of the current state of emergency.

“Most people we’ve spoken with don’t feel secure even with that,” he said. “The landlord might not be able to evict now, but if someone doesn’t pay now, once the moratorium is lifted, they might evict later.”

Simmons added that he’d like local governments to step in to implement protections for renters but believes that is unlikely.

According to Simmons, it’s unclear just how many tenants in Bloomington participated in the strike this month, explaining that he has limited information.

When asked for comment, the Monroe County Apartment Association said information on April’s payments is still coming in, but roughly 80 percent of payments have been collected. The group said its board of directors will meet this week to further discuss market conditions.

Critics of the rent strike aren’t shy, even on the Bloomington Solidarity Network’s Facebook page. But Simmons said those who have spoken against it have done so because a strike wouldn’t benefit them.

“If they feel threatened by something like a rent strike, that’s entirely the point,” Simmons said. “My message to them is that they need to decide which side they’re going to be on. Are they going to be on the side of the property or the side of the people? That’s a choice that they’ve comfortably been able to not have to make for a long time.”