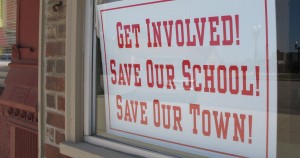 A "Save Our School" sign in a window in Worthington.

Want to pass a referendum in your school district? Better get to work, says Donna Petrait.

Get to work, like, yesterday. Or a few years ago.

“Any school district that is anticipating having a referendum needs to start three years in advance,” says Petrait, who consults for school districts on strategic communications plans.

It’s one of the lessons Petrait picked up in Indiana’s brief history with referenda. Since 2008, only half of the 92 districts who’ve tried to convince voters to raise their own property taxes have been successful.

But Petrait says voters are also beginning to get an idea of what’s at stake as property tax caps squeeze schools’ revenue streams.

“People are starting to feel the pain,” Petrait tells StateImpact. “I think until the taxpayers start to feel the pain of what’s going on in their public schools, they will not feel the urgency or the necessity to change things.”

But Petrait says it’s also incumbent upon districts to prove they’re good stewards of taxpayer dollars. According to the editorial board at the Fort Wayne News-Sentinel, that’s a good thing:

Districts are learning what to ask for as well as how to ask for it. As we noted after Fort Wayne Community Schools lost a referendum on an extravagant bond issue and won approval for a more modest one, if voters are presented a realistic proposal clearly explained, they are likely to respond affirmatively. But shoot for the moon, and they’re apt to conclude that the district has been wasting their money and will continue to do so.

As school districts continue to feel the pinch caused by changes in state tax laws, they will need more referendums. They’re likely to feel a growing resentment at having to beg voters for bailouts. But they will also understand the growing need for modesty and honesty when it comes to dealing with those voters.

Downs points out one of the challenges districts have come to face in selling referenda in the Indianapolis Star:

Perhaps the biggest disadvantage that schools face is the limit the law places on the role the district and its employees can play in the actual campaign. This can mean that the people who have the best understanding of the issues and reasons for passing the referendum are limited in their ability to share that information. It also means the “yes” campaign has to find a spokesperson, and this person may not have experience dealing with the media or presenting a position in front of friendly and hostile crowds.

Already, school officials in Elkhart are pondering a referendum and will hold a public meeting to discuss their proposal next week, The Elkhart Truth reports.