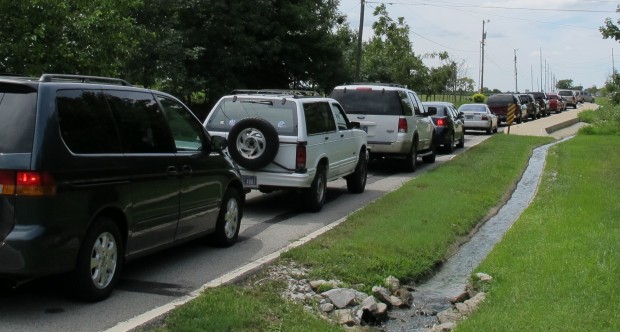 Traffic jams built up outside Franklin Township schools in August on the first day school busing in the district was no longer free to families. The district's school board voted to stop the bus fees

They caused traffic jams, drove parents out of the district, and even brought on a lawsuit.

They were the most explicit sign of the pressures Indiana school districts felt as a result of the state’s new, constitutionally-enshrined property tax caps.

But now, Franklin Township’s “pay-to-ride” school busing fees are a thing of the past — that’s the good news. The district’s school board voted to stop charging the fees by a 5-0 vote.

The potential bad news? Over the long run, the fix may end up costing taxpayers more.

First, a little more on the good news — as the Indy Star reports, the district voted to refinance its debt, which was made possible by a newly-passed state law:

Bourke likened the refinancing plan to a homeowner going from a 15-year to a 30-year mortgage.

“We have taken the first steps to solve our property-tax problems,” Bourke said. “The future is bright.”

The new bonds will cost more in the long run, but the district will have lower payments and more cash to cover bus service and other bills.

That’s a marked change in tone from Bourke, who expressed deep frustrations when StateImpact spoke with him in August.

The Indiana General Assembly outlawed Franklin Township’s busing fees this session, but also passed a law providing relief for districts who lost more than 20 percent of their property tax revenues. 45 districts that cumulatively lost $136.9 million to the caps are now eligible to restructure their debt under the new law.

But that’s where we get to the bad news: