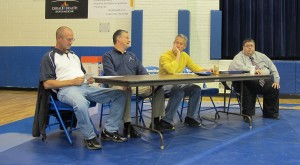 Superintendent Jon Willman, right, and members of the Hamilton Community School Board take questions about a proposed tax levy increase during a public meeting ahead of the November 2012 election. The referendum passed with 74 percent of the vote.

Less than a quarter of Indiana school corporations have pursued a referendum in the five years since the state legislature changed the way districts can levy taxes for construction and operating expenses.

Fourteen of the 67 districts have made two or more appeals, including two school corporations that passed construction referenda Tuesday — Hamilton Southeastern and Noblesville. The seven questions that appeared on the ballot in this week’s special election bring the total number of school referenda in Indiana to 88 since 2008.

(Scroll down to find StateImpact‘s scorecard on five years of school referenda is after the jump.)

Districts asking for a tax levy increase to bolster the general fund have fared slightly better than school corporations asking voters to approve building projects, though only 45.7 percent of referenda have passed so far.

Purdue agricultural economist Larry DeBoer says Indiana is still relatively new to referenda and it’s too soon to tell what impact elections will have on school district budgets. But here’s what we can tell you:

Terry Spradlin, Director for Education Policy at the Indiana University Center for Evaluation & Education Policy (CEEP), has been keeping track of Indiana’s referendum results for the past several years. He’s published his scorecards in CEEP policy briefs. With now five years of results to track, we wanted to create a searchable, sortable scorecard.

We’ve compiled the following table using information from the Indiana Department of Local Government Finance, from IU’s CEEP, from local superintendents and from county election clerks.

Click on the arrows over the column headings to sort results by district name, by the tax rate increase they sought (per $100 of assessed valuation), by the total amount of money at stake or the election result. In the Search box labeled “Filter,” enter the name of a district to find the results of a referendum.

One note: Although district can levy up to the tax rate and total amount listed in the table, they can collect less money if their financial needs change.