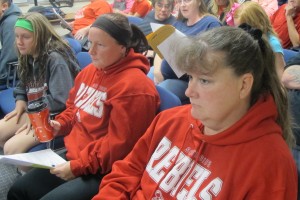 Supporters of Muncie Southside High School asked the Board of Trustees not to close the school. But district officials concluded the building could not be converted to house students in 7-12 grade. Next year all high schoolers in the district will go to Muncie Central.

The Muncie Community Schools Board of Trustees voted this week to consolidate the city’s two high schools. The merger is expected to save the district $1.7 million annually — but it’s unlikely to solve the district’s transportation problems.

“Very seldom will you have two initiatives like this at the same time,” says Superintendent Tim Heller, who on Monday recommended the board vote to move all high school students to Central and reopen Southside as a middle school.

Despite the efforts of Southside parents and students, who packed town hall meetings advocating for moving grades 7-12 into the high school buildings, the board voted 4-1 in favor of the plan.

Logistically, Heller says there just wasn’t enough space at Southside to make it work. So next year Southside will house grades 6-8, and the district will close Wilson Middle School.

“I was principal of Muncie South for three years,” says Heller. “I would certainly hate to have to close that school. But by the same token, my goal is to continue to meet the payroll on the 5th and 20th of each month.”

Closing Southside, says Heller, will help make that happen. But it won’t save the district enough to pay for bus service, too.

Muncie’s financial woes have been going on for some time. In the past six years, the district has lost about 1,000 students, cutting the amount of funding it receives from the state.

But declining enrollment isn’t the district’s only problem. Muncie has also lost revenue to property tax caps, which were added to the constitution in 2010.

MCS Chief Financial Officer Mark Burkhart says property tax revenue next year will be down 89 percent from before the caps took effect.

Closing a school will help the district’s facilities and maintenance costs, which officials also use property tax dollars to pay.

But the savings won’t be immediate enough to make enough room in the budget for the district’s $3 million transportation contract. So earlier this month Muncie put a 39-cent tax levy before voters. If the referendum failed, district officials said they’d be hard-pressed to pay for buses.

“Property tax caps are here to stay,” says Hiatt, a local businessman and vocal opponent of the referendum. “They’re in the constitution.”

Hiatt and other members of his organization felt the district should never have made the election about buses.

“Are there options that are viable, and alternatives to taking the school bus away from our children?” he tells StateImpact. “Oh yeah.”

And the majority of Muncie voters agreed with Hiatt: They rejected the referendum.

Why The Busing Referendum Was A Hard Sell In Muncie

Part of the problem may be that transportation issues don’t resonate with voters, says Purdue University economist Larry DeBoer. 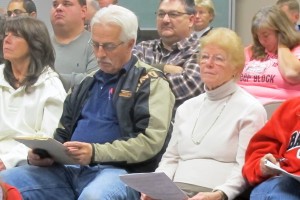 Citizens of Delaware County for Good Government Vice President Chris Hiatt says the district needs to find a way to pay for buses without increasing taxes.

Hiatt has a different theory: He says school officials in Muncie should have acted sooner to cut costs to show taxpayers they were serious about getting the district’s finances in order.

“I truly believe that had they acted before the referendum  — and maybe in retrospect asked for less for money — they might have had a successful effort,” says Hiatt.

Hiatt thinks waiting until after the election to close schools hurt the district’s chances of passing a tax levy increase. He says the district needs to find some other way to pay for transportation.

Superintendent Heller says there’s just not room in the budget.

“We certainly don’t have a surplus of money sitting anyplace that we can tap into,” he says.

The state requires school districts to provide three years’ notice before stopping bus service, or else seek a waiver with the Indiana Department of Education. If Muncie doesn’t get permission to stop transportation at the end of this school year, then district officials will have to figure out how to pay for buses for two more years. That would leave time for another referenda attempt in 2015.

But there’s no telling how successful it would be. Of the 11 Indiana school districts that have taken questions back to voters for a second try, only four have been successful.