A bus waiting outside Hose Elementary School in Crawfordsville.

In the short term, Crawfordsville Schools finance director Scott Bowling isn’t worried about the statewide property tax caps‘ hit to his district’s revenues — at least not worried enough to apply for state help.

But he is worried about the long-term implications of the caps on the finances of Indiana school districts. 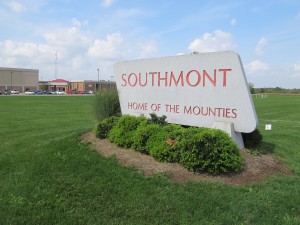 “We’re not addressing the inequities that are going to arise in the long-term as a result of the tax caps,” says Libby Cierzniak, an attorney at Faegre Baker Daniels who lobbies the General Assembly for the Indianapolis Public Schools.

Indiana policymakers have long labored to bring equity to the state’s funding formula — and it hasn’t been easy. Now, it appears the property tax cap debate has become a new part of an old argument.

Before 2009, Cierzniak says the essential problem was that property tax revenues made up a sizeable chunk of most district’s budgets.

That caused a gap between districts with high property wealth and districts with low property wealth. The state might have attempted to fund schools equally, but it was easier for richer districts to use property taxes to raise money for their General Fund, which pays for basic classroom expenditures like teacher salaries. Poor districts didn’t have that luxury.

But in 2009, state lawmakers said property tax revenues could no longer cover General Fund expenditures. Local property taxes, they said, would still pay for new buildings, school maintenance, busing, technology and other expenditures. But expenses arguably most central to a school’s educational role — namely, teachers and classroom supplies — would be completely funded by state sales taxes.

At that point, many thought the equity argument in school finance was over. Here’s a 2009 paper from Indiana University’s Center for Evaluation and Education Policy:

The issue of funding equity as traditionally conceived — which at the most elemental level is a concern about variations in community wealth — was rendered moot when the Indiana General Assembly decided that all General Fund revenues would originate at the state level and that local property taxes would no longer be used as a revenue source for the General Fund of school corporations.

Most agree the property tax caps — which voters enshrined in the state’s constitution by a wide majority in 2010 — were born of a legitimate desire to curb increasing property tax bills.

“I think the taxpayers said, ‘Hey, wait a minute, our taxes keep going up and up and up.’ So what we tried to do was break the system from the continued growth,” Rep. Bob Cherry, R-Greenfield, told StateImpact. He later authored the legislation that reconstituted the Distressed Unit Appeals Board to offer state help to districts hurting because of the property tax caps.

But Cierzniak says the property tax caps also brought an old problem back to the fore — and it’s not just Crawfordsville’s revenue loss being larger than its neighbors’.

“We’re seeing a greater reliance on referenda to help support operating funds,” she says. “As we move to putting more operational costs on the property taxes or allowing property tax dollars to be used in the classroom, then these inequities resurface.”

There were some school districts that were ten times wealthier than others, which means they could build new buildings at a much lower tax rate than a poor school district, like Gary Community Schools. That’s something that I think a lot of policymakers have concern over, especially as we move to a referendum process.

It would seem to me that most people can do the math, and they’re like ‘Oh my, why am I paying a rate this high?’; that referenda are more likely to prevail if the [property tax] rates are lower, and the rates are more likely to be lower in districts where the assessed valuation is higher, which generally equates to wealthier districts. I don’t know that that’s really played out that way — it might be too early to tell.

The impacts, Cierzniak says, are huge for school districts. For instance, she points to Indianapolis Public Schools, whose magnet school options — necessary, she says, to compete with local private and charter schools — require the district to bus students all over the city. But the tax caps put IPS in a precarious position because the district has low property wealth to begin with and property tax caps have siphoned off money from its transportation funds.

However, much of Cierzniak’s argument is contingent on referenda failing in Indiana — and as state budget director Adam Horst noted in an interview with StateImpact, some referenda are passing:

There are relief mechanisms and valves for folks to operate outside of the caps, but the taxpayers have a say then. It’s not that all taxpayers are saying no, and referenda are being approved. But some are not, and so I think it’s a question of how compelling is the case and how well are they making their arguments, and candidly, what actions have they taken before they asked for another dollar of tax money from someone who, candidly, doesn’t have a lot of that right now.

Indiana state superintendent Tony Bennett has also expressed support for the tax caps in the past.

“Many people would say that local property taxes were more stable, but one could argue that it allowed schools to budget backwards,” Bennett told The Times of Northwest Indiana in May 2010. “There is no other industry where we generate revenue to meet expenses. Under the new way of budgeting, we know what the revenue is and we have to manage our expenses accordingly.”

Now, as a reporter, I ask you — my trusted audience… Does any of this make sense? And what questions does all of this raise for you?