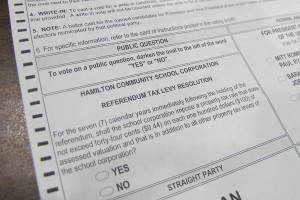 Four more votes — that’s all it would have taken to tie a close election in Porter County Tuesday night. The Metropolitan School District of Boone Township asked voters to approve a 23-cent tax levy increase per $100 of assessed valuation: 543 said yes, 547 said no.

Boone Township already has one of the highest tax rates in the state. But it hasn’t been enough to make up a shortfall in state funding.

“Once again, funding for education depends on where you live,” says Superintendent George Letz. “I don’t know why the legislature does not ever get that point across that there’s still unequal funding in the school districts of Indiana.”

Five of the seven Indiana school corporations appealing to voters for additional funding succeeded at the ballot box Tuesday. The other loser was the Knox Community School Corporation, which had hoped to raise $16 million to rebuild part of its elementary school.

Here’s a quick look at what happened in Tuesday’s special election.