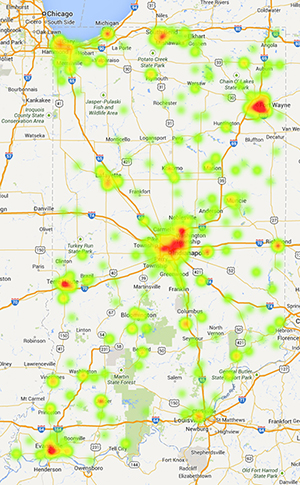 A heat map shows the distribution of childcare providers participating in the state's Paths to Quality program that are rated at levels 3 or 4.

But even if state lawmakers approve the governor’s plan, some Hoosiers may have to travel long distances to find a high quality pre-K program for their 4-year-olds.

More than 2,300 Indiana childcare providers participate in the state’s voluntary Paths to Quality program. But only a third of providers are rated a level 3 or 4, the threshold early learning advocates say indicates high quality.

Using data from the Family and Social Services Administration, we heat-mapped all participating level 3 and 4 providers — and found large parts of the state where there just aren’t many high quality options.

Think of the heat map as a summary of where level 3 and 4 providers are concentrated. You can look up how many highly-rated pre-K providers are in your zip code after the jump.

Note the map doesn’t show pre-K providers rated level 1 or 2 on Paths to Quality program. According to an Indiana University study, it’s unlikely such programs would meet the benchmarks early education researchers use to define high quality.