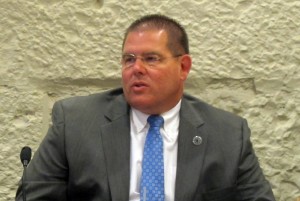 “Don’t,” says Brownsburg Superintendent Jim Snapp, a member of the A-F panel tasked with revising the state’s accountability system for schools, “let the State Board make major changes to a program we have spent significant time developing.”

Snapp offered his suggestion last week as panel members outlined their expectations for the state’s next accountability system at the group’s first meeting. The panel has until Nov. 1 to make a recommendation on how to assign letter grades to Indiana schools.

But to Snapp’s point, it’s then up to the State Board of Education to decide whether to take the panel’s suggestion or go a different direction. That’s to be expected, says panel co-chair Steve Yager, the superintendent of Southwest Allen County Schools.

“I think part of our marching orders when we were asking to participate on this panel was to come up with some ideas, thoughts, suggestions and recommendations,” Yager told StateImpact. “I didn’t come into this with any guarantee that whatever we suggested was going to be adopted and automatically rubber stamped by the legislature or the Department of Education.”

The Indiana General Assembly had already flagged Indiana’s two-year-old accountability system for a rewrite when it came to light that former state superintendent Tony Bennett and his staff had changed the grades of 165 schools, including a prominent donor’s charter. Though a pair of independent reviews concluded Bennett’s actions were “plausible,” questions of transparency led state leaders to assemble the A-F accountability panel.

Ritz has butted heads with other State Board members in the past when she’s suggested changes to Indiana’s accountability model. In April, board members told her they wouldn’t support a system that moved away from assigning schools A-F grades.

But that, at least, shouldn’t be a problem: The legislation that triggered the rewrite requires the state continue to assign letter grades.

The State Board didn’t have much time for discussion around changes to the A-F model at the end of its lengthy September meeting. At the time, the final makeup of the 17-member accountability review panel had not been set yet.

But in the past, board members have expressed frustration with what they saw as state lawmakers meddling in the State Board’s work.

“I’m sad that legislators feel like they have to run the Department of Education,” former board member Jo Blacketor told StateImpact in May.

Marian University President Dan Elsener is leading the board in a six-month strategic planning process, but he was out of the country and unavailable to comment.