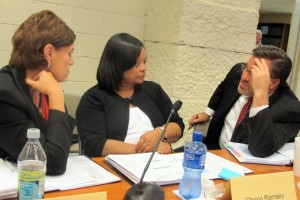 The education panel tasked with revising the state’s A-F accountability system has less than six weeks to rewrite the metrics used to grade Indiana schools.

But Indiana Department of Education staffer Wes Bruce added another challenge Tuesday at the panel’s second meeting: Make sure the system will work when the state moves to college- and career-ready assessments in two years.

It’s a tall task considering state education officials don’t know what test Indiana students will take 2015-16. As the state transitions to the Common Core or similar standards, Indiana won’t be able to use the ISTEP+ in its current form.

“Our current test would not pass peer review,” Bruce told the panel Tuesday. “We do not have an assessment which is measuring college- and career-readiness.”

Here’s how Bruce explained it: When it comes to designing an assessment for accountability purposes, the U.S. Department of Education has given Indiana a set of guardrails. The state has to stay within those rails if it wants to keep receiving federal money to offset the cost of that assessment.

Any test the state uses for accountability purposes — right now, that’s the ISTEP+ — must pass a peer review to certify it’s a fair assessment of the state’s expectations for students. That process is more of a journey than a destination, says Bruce, because no standards align perfectly with their assessment.

We wrote last week that whatever system the panel designs must meet strict state and federal accountability guidelines. To Bruce’s point, the panel has the added challenge of writing rules at a time when the state’s academic standards and next assessment are also under review.

UPDATE, 3:37 p.m.: State Superintendent Glenda Ritz says she doesn’t necessarily think the current education policy climate will make the work harder, as the A-F accountability panel’s job has always been to look to the future. She says that includes planning for the transition to new standards and assessments. 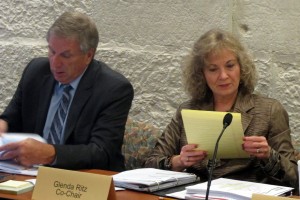 “We want to create a model that will encompass change,” Ritz told StateImpact after the meeting. “How do we get to that change? It would be great to have a model that if you switched assessments, you would still have a good accountability model.”

But Ritz’s co-chair, Southwest Allen County Superintendent Steven Yager, says it might be a stretch to assume Indiana will get a new assessment.

As Yager points out, it’s not the panel’s job to suggest a new test for Indiana students. However, the same legislation that calls for a rewrite of the state’s A-F accountability system also requires Indiana transition to the Common Core or similar college- and career-ready standards, which the current ISTEP+ test can’t assess.