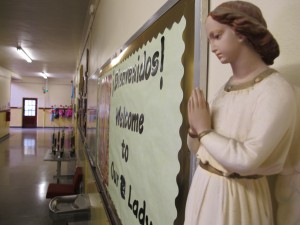 If the number of applications for Indiana’s private school vouchers is any indication, enrollment in one of the nation’s most sweeping school choice programs could more than double this year. Tom Brinkman has the story at Indiana Public Media:

Indiana education officials confirmed Tuesday they’ve received more than 20,000 applications for voucher dollars. That means the program has more than quadrupled its enrollment since it started two years ago.

“Quite honestly it’s just phenomenal and nothing we ever dreamed of in 2011. I think it is in part the result of the legislation that the general assembly and Governor Pence passed,” she says…

Wiley speculates much of the program’s growth this year to a key provision of the new law: students do not have to attend public school for a year before receiving a voucher if they have a sibling who’s already done the same.

More than 9,100 students enrolled in private schools with the help of state vouchers last year. $37 million from the state’s K-12 budget covered the cost of those vouchers.

The state capped voucher enrollment to 15,000 last year, but there’s no limit to the number of vouchers the state can award this year.