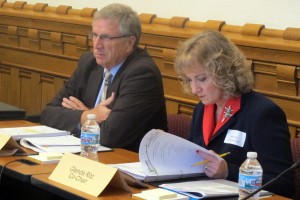 The panel tasked with reviewing the state’s A-F accountability system met for the first time Thursday. It’s important the panel make its recommendations within the parameters of Indiana code and federal law, says Ritz.

“The assigning of the grades — A, B, C, D, F — is in law,” says Ritz, who is co-chairing the panel with Southwest Allen Schools Superintendent Steven Yager.

So eliminating letter grades from the state’s school performance ratings isn’t an option. But the 17-person panel revising Indiana’s statewide accountability system has a chance over the coming weeks to redefine what each letter means.

The panel will meet once a week until Nov. 1, when it has to make a recommendation to the State Board of Education.

Thursday’s meeting started with a history lesson — where Indiana started, and how the state got here.

Even before it came out that former state superintendent Tony Bennett’s staff tinkered with the metrics used to calculate the 2011-12 letter grades, state lawmakers had flagged the fledgling accountability system for a review.

Ritz says she has no preconceived notion about what the panel’s final recommendation will look like.

“It’s pretty clear our system has to be based on a student’s performance level as well as the growth they’re making,” she says.

But this much is clear: Indiana won’t be going back to the complicated growth calculation currently used to score schools. Ritz has criticized the comparison of students to their peers across the state, saying it’s not a true growth model.

Instead, the panel must come up with a way to measure individual students’ growth.

The group must also work within federal accountability rules or jeopardize Indiana’s No Child Left Behind waiver. Without it, the state would have to go back to strict reporting requirements that penalized schools who failed to make adequate year progress — not to mention the expectation that all students at all schools reach proficiency by 2013-14.

That’s why Ritz says she wants a new accountability system in place before it’s time to renew Indiana’s two-year waiver.

What’s Ahead For A-F Panel

Ritz and Yager concede getting everything done before the panel’s Nov. 1 deadline will be a challenge. Their recommendations have to go to the State Board so members can initiate the rule making process to rewrite the accountability system.

“We know we have a lot of homework in between meetings, and we’re up to that task,” says Yager.

Though Thursday’s agenda focused on history and expectations, Ritz says there will be more flexibility moving ahead.

“Once we get to the point where we’re actually talking about what components we’d like to see in our accountability system, that will start to drive each time’s agenda,” Ritz says.

Ritz did bring up two points at the panel’s first meeting — the need for a more flexible model to can handle various types of schools, and the need for a pilot before the system launches.

“However, how those categories look, what are the components of the accountability system … we want a fair, transparent system that is easy to understand.”
—State Supt. Glenda Ritz

The changes Bennett’s staff made in 2011-12 were in part to accommodate growing schools that weren’t strictly elementary/middle schools or high schools. The old system used two different models to calculate those scores.

But Ritz says there are more than 90 different grade-level configurations at Indiana schools. She pointed out that K-2 primary schools don’t administer the ISTEP+ test but are assigned the same letter grade as the upper elementary to which they are attached. Moving forward, she wants a more nuanced system that can handle combined schools.

She also wants extensive sampling based on the current A-F accountability model before a new system launches. Representatives from the Legislative Services Agency says they would be able to make those calculations from data the department already collects.

If, ultimately, there are differences between what state education officials think a school should receive and what a school actually receive, Ritz says the conversation about what happens to that school’s grade needs to happen in the open.