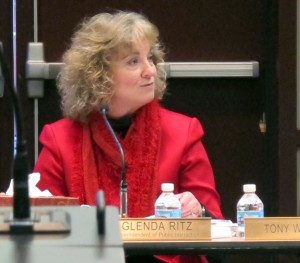 State Superintendent Glenda Ritz asks board members for their thoughts on school accountability during her first Indiana Board of Education study session.

One of the questions we asked after Democrat Glenda Ritz’s upset victory over former state superintendent Tony Bennett last year was how well she would work with a Republican-appointed state board.

During Wednesday’s Board of Education study session — Ritz’s first — she tried to outline her vision for a statewide accountability system, but met resistance from some board members when she suggested making changes to the growth model.

“I cannot quite frankly tell any school what their grade represents,” said Ritz, who criticized the state’s A-F accountability system on the campaign trail. “It’s a combination of growth and achievement together, but the calculations are so complicated for the growth portion that I cannot tell them what it means ”

But board member Neil Pickett told Ritz he “rejects the notion” it isn’t clear what the letter grades represent.

“I don’t accept the idea that this isn’t transparent and isn’t explicable,” said Pickett. “And I won’t support anything that moves away from A-F.”

Ritz says right now students are compared to their peers across the state, but she’d rather measure individual students’ progress year-over-year. She proposed using the “gap method” — calculating how many points over or under the Board of Education-set cut score  — to determine growth.

Board member Daniel Elsener asked Ritz to clarify what she wanted to happen with the current accountability system.

“Are you recommending we get rid of letter grades?” Elsener asked.

“I haven’t recommended anything formally to you at all,” Ritz replied, adding her goal for the study session was to present her “conceptual framework” and make sure the board understood her vision.

Board member Jo Blacketor told Ritz the conversation about school accountability would take more than an hour and a half, and Ritz agreed. Then Blacketor asked the state superintendent to keep a few questions in mind moving ahead.

“Without building growth, how will schools know how much to improve?” Blacketor asked.