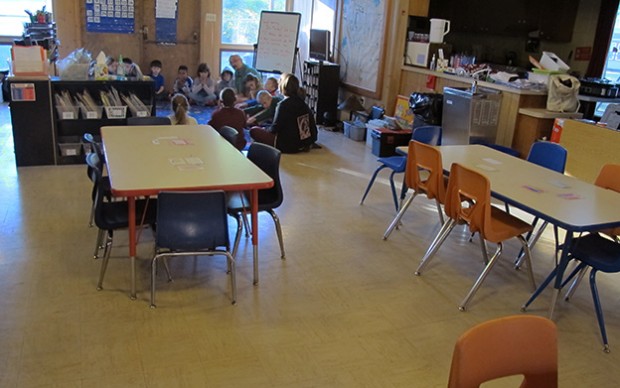 After holding classes last year in a gymnasium on the east side of Indianapolis, the early primary school-aged students at Project Libertas — a private school born after the closure of a charter school — now meet for class on the campus of the Unitarian Universalist church on the city's north side.

Last year, the staff and students of Project Libertas, a now-private school born out of the the remnants of a shuttered Indianapolis charter school, held classes in a gymnasium.

This year, the school is holding classes in an 80-year-old brick schoolhouse on the campus of the Indianapolis Unitarian Universalist church — luxurious, by comparison.

And there’s not a tumbling mat in sight.

“I’m not next to a trampoline. That’s always a plus,” teacher Owen Harrington jokes, surveying the space. “This is an honest-to-goodness classroom.”

A look around Project Libertas’ new home offers no hints of the dramatic events that led to its founding last summer: the protests following Mayor Greg Ballard’s revocation of the Indianapolis Project School’s charter in July 2012 and a dozen disenchanted families’ refusal to disband. 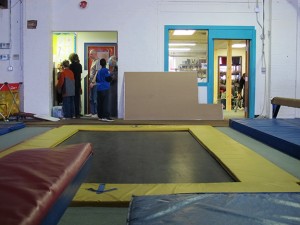 FILE PHOTO: Project Libertas held classes last year at Jireh Sports, a church-owned community center and gymnasium. The students use classrooms tucked in between large, open spaces covered with balance beams, tumbling mats and trampolines. This year, the school is in a new location.

Going Off-The-Grid & Back On Again With Vouchers

The parents and staff now at Libertas aren’t the only ones who’ve seen their school come back from the brink of closure. When several Indiana charters lost Ball State University’s backing this summer, the schools’ leaders found new authorizers or converted to private schools. Without an authorizer’s approval, a charter school effectively cannot receive state funding.

But unlike the others, whose cash flow never stopped entirely, Libertas’ parents and teachers found out what it was like to operate a self-described “independent-communal-startup” school with no accreditation and no state funding at all.

The school dropped off the grid. Students didn’t take statewide tests last year. The school’s employees often went without pay, accepting any student so long as their parents agreed to pay whatever they could afford. Between tuition and donations, the school operated on roughly $60,000 last school year.

But that all changed this spring when Project Libertas received state accreditation as a private school, meaning this school year, its students could use private school voucher dollars to help with their tuition costs.

And voucher dollars changed everything. With four in five Libertas students using vouchers, principal Megan Hughes anticipates the school’s income will more than quadruple over last year — to $260,000 — making the move to the new building possible.

“Last year, we were take-what-we-can-get, pay-what-you-can, go out, raise money, find it when you can,” says Matthew Brooks, one of the first parents to call for Libertas’ creation. He now serves as the school’s board president. “This year, we have a level budget with real payroll.”

Even though teachers don’t earn as much they could in the Indianapolis Public Schools, they can at least expect regular paychecks.

New Challenges, But ‘A Second Chance’ 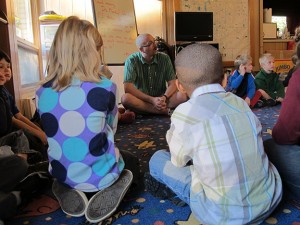 “By most objective measurements, The Project School failed to deliver on the promises made in its charter agreement with our city and to the students it pledged to serve,” Ballard said in a statement last July, “and it has offered no credible plan to address these problems.”

Libertas’ leaders have said they’re not trying to wholly re-create The Project School.

When Libertas’ staff reached out to him for advice, he reminded them they must at least earn C’s on the state’s grading scale. If the school receives D’s or F’s two years in a row, the state would cut off the school’s voucher funding.

“Even if they have a history, so long as they show themselves to be transparent, I think we should give them a fresh start, and that’s what we can do and offer,” Enlow tells StateImpact. “If they can prove themselves and do it quickly, they can put some of these criticisms to rest, but again, the proof is in the pudding.”

Though Bigger, Libertas Is Staying Small

At least one metric at the school is up, though: Enrollment.

There were 39 students at the school last year. But with 64 students now, Project Libertas is nearly full. School leader Megan Hughes says she’s comfortable keeping the school at this size for the time being.

“We want to stay there until we know that we’ve got all the kinks worked out, that we have exactly what parents want,” Hughes says. 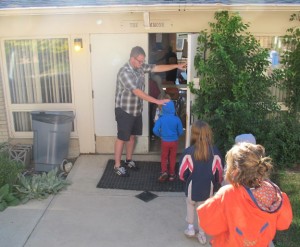 That goes against the conventional wisdom in the charter world, where measuring enrollment growth is one of the ways charter authorizers hold schools accountable.

But Hughes says the school’s small size helps teachers focus on each student. That may be why Project Libertas’ teachers say they’re not worried about students taking statewide tests this school year — even though the school took a one-year hiatus from the exams; even if the school’s future funding depends on the results.

Hughes says the new building is already helping. With the distractions of their old home in the gymnasium gone, teacher Owen Harrington says students are more focused.

“If someone was interested in what Project Libertas was doing, they would come visit us and we had to convince them that what we were doing was so great that they should overlook the space,” Harrington says. “This year, all we need is for someone to be interested in what we’re doing, because once they come visit, they’re sold.”