Who's Who On The State Board Of Education 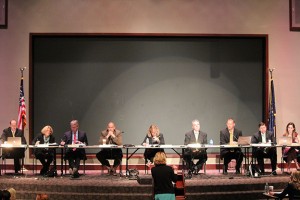 Members of the State Board of Education hear public comment at a spring 2015 meeting – the group’s last before lawmakers reconstituted the board. (Photo Credit: Rachel Morello/StateImpact Indiana)

State superintendent Glenda Ritz chairs the State Board of Education, whose 10 members are appointed to four-year terms. The State Board is responsible for authorizing school funding, overseeing the statewide accountability system and intervening in struggling schools.

Legislation passed in 2013 to review the Common Core State Standards and rewrite Indiana’s A-F school ratings system has heightened the profile of the State Board in recent years.

Oversight of the State Board’s operations and budget used to fall to the Indiana Department of Education. But in 2013, state lawmakers decided to fund the State Board as a separate line item with an annual operating budget of $3 million. That’s led to concern that the board — largely Republican — will not continue to work with the superintendent’s office.

Then, in August, Governor Mike Pence created a new state agency, the Center for Education and Career Innovation, to coordinate efforts between the State Board and other panels exploring career and technical education. The move didn’t sit well with Ritz, who says she was left out of the loop.

During the CECI era, other State Board members and Ritz clashed frequently on issues such as A-F school letter grades and statewide academic standards in recent months, leading to the superintendent walking out of a meeting. Board members also accused Ritz of not putting their items on the agenda for discussion. Ritz countered that CECI is trying to strip her of authority as the Board’s chairwoman.

As a result of all the tension, Gov. Pence dissolved CECI in December 2014. He also signaled his intent to make board reform a priority during the 2015 “education session” of the General Assembly. Lawmakers followed through on his request, in the end approving legislation that allowed them to reconstitute the board at once.

Senate Bill 1 also changed how board appointments are made: the House Speaker and Senate President Pro Tem now have one appointment apiece, with the other eight falling to the governor.

The 10 Appointed Board Members

Besides the superintendent, the board’s other 10 members include representative from various Congressional districts and a few “at-large” members:

Lawmakers debated during discussion of a bill that would restructure the state’s diploma system and help implement new graduation pathway requirements.

Significant changes are in store for the state’s school grading system, but the State Board of Education had trouble finding a starting point at its first meeting of 2018.