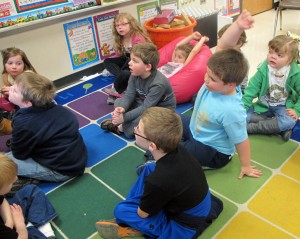 Kindergarteners and first graders are already being taught using the Common Core State Standards. Indiana planned to add second grade next year, but that plan has been put on hold pending a legislative review.

But what happens next is unclear. According to the bill Gov. Mike Pence signed into law last week, the State Board of Education can take no further action to implement the Common Core State Standards. Yet the legislation also leaves any standards adopted before May 15, 2013 in place.

Proponents of the new standards argue pausing implementation of the Common Core will leave teachers unsure what to teach next year. But the bill’s statehouse advocate disagrees.

“I don’t know how stopping and taking another look at this in any way is worse than moving forward with something we think is bad,” says Sen. Scott Schneider, R-Indianapolis.

For two years Sen. Schneider worked with Indianapolis parents Heather Crossin and Erin Tuttle on legislation to halt rollout of the new academic standards in Indiana. But the group — known as Hoosiers Against the Common Core — faced an uphill battle. After a Senate bill he penned stalled in the House Education Committee, Schneider attached anti-Common Core language to legislation that had already passed the House.

Opponents of the Common Core rally at the statehouse before a January Senate Education Committee hearing.

“The fact of the matter is, there was enough momentum about this issue for everybody in the statehouse, enough people to get it passed, to say, timeout, stop, and let’s do a thorough review,” says Schneider.

Tuttle asked Schneider to pursue the legislation after the math curriculum at her daughter’s elementary school changed. She says the Common Core State Standards aren’t as strong as what Indiana had before. And she fears Hoosiers will lose the ability to set academic standards at the state level.

“It was the math homework that alerted us, but the more you look into it, the more you realize there’s a loss of local control, that it is indeed a federal takeover of education through the assessment,” says Tuttle.

Why It Matters Whether Students Prepare For ISTEP or PARCC

Right now Indiana is part of a consortium developing new tests called Partnership for Assessment of Readiness for College and Career, or PARCC. It’s one of two consortia developing Common Core assessments.

The bill Gov. Pence signed into law last week doesn’t withdraw Indiana from PARCC, but it does keep the ISTEP in place through the 2015 biennium, a year longer than the Department of Education planned to administer Indiana’s current assessment.

It’s a concern for teachers because ISTEP and PARCC cover different material. They need to know what standards to teach so students can do well on state tests, scores on which affect school letter grades and teacher pay. But at the May State Board of Education meeting, Superintendent Glenda Ritz said it shouldn’t be a problem.

“The only two grade levels that have totally implemented the Indiana Common Core Standards are grades K and 1. All other grade levels are teaching both sets of standards,” says Ritz.

Second grade was supposed to adopt the Common Core in 2013. Ritz says that won’t happen now. Instead, schools should continue doing what they did this year — teaching Common Core in kindergarten and first grade and both sets of standards in second grade and up.

But not all schools were following the state’s timeline for implementation. Before the pause legislation passed, some districts planned to “go early” and make the switch to Common Core next year, ahead of schedule.

“A lot of that was left up to local decision,” says Jennifer Lee, a math coach for Greene Education Services. “Which is a good thing. We want that.”

But Lee says it’s also left schools unsure what to teach next year with just weeks to go before summer vacation starts. Though five school districts she works with in Greene County haven’t adopted Common Core across the board yet, they have invested significantly in resources aligned to the new standards.

“Right after that first year, we actually went ahead and adopted Common Core resources,” says Lee. “So across our entire county now grades K-12 we have spent thousands of dollars.” 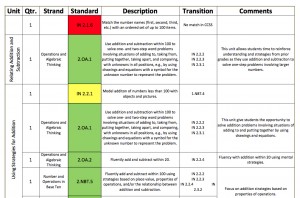 A curriculum guide shows how Indiana standards align with the Common Core.

That’s why Lee says unless explicitly told not to continue by the state — “if they pull the instructional guidance and say it’s not to be used” — Greene County schools plan to roll out the new standards in second grade and teach Common Core in tandem with the old Indiana standards.

Prepare For More Common Core Debate At The Statehouse

Lee says she is often asked to explain the Common Core at board meetings, public forums and school events. As a math coach, she constantly fields questions from parents about a changing curriculum they see as confusing. But while she says the Greene County school districts have made an effort to talk to parents about the new standards, she says she’s not sure if the public understands the changes happening in Indiana schools. 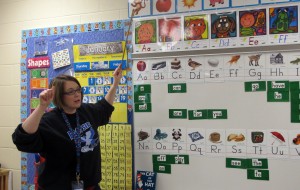 That’s one of the reasons she feels there’s been pushback against the new standards. But then there are those who say Indiana is experiencing “standards whiplash” after changing academic goals three times in eight years.

Rep. Kreg Battles, D-Terre Haute, teaches high school chemistry. He says if Indiana is going to adopt the Common Core, taking a year to review the new standards before teachers make sweeping changes to their classrooms is a good idea.

“If we’re going to do this, let’s make darn sure this is something we’re gonna do.”
—Kreg Battles, D-Terre Haute

Battles says he expects the latter. But one thing is certain: Indiana won’t be going back to its old standards, which aren’t considered college and career ready. That means if Indiana decides not to adopt the Common Core, the state will still have to adopt new standards, and they might look a lot like the Common Core.

Ultimately, the decision rests with the State Board of Education. After the legislative review, the state board has until July 1, 2014, to reaffirm its support for the Common Core or pick a new direction for Indiana.

Got a question about the Common Core? We’re still taking your Core Questions. Connect with us via Facebook, Twitter or email and let us know what questions you have about Indiana’s Common Core pause.