Today, we’re answering a question posed from longtime commenter karynb9 on a post about the statehouse Common Core hearings earlier this year:

A Common Core timeout proposal appeared dead on arrival in the House Education Committee earlier this session. But similar language — this time calling for a halt to the new standards pending legislative review — made its way into a separate education proposal that passed the Senate earlier this month. As state lawmakers ponder a Common Core opt out, we take a look at what would happen with textbooks if Indiana withdraws from the new standards.

Textbook publishers cater to the largest market. In this case, that’s probably the 44 states still committed to the new academic standards, says Kathleen Porter-Magee of the pro-Common Core Fordham Institute.

“The likeliest scenario is the biggest textbook publishers are going to focus the lion’s share of their time and attention on creating materials that are really very well aligned to the Common Core,” says Porter-Magee.

So, in a word, yes. If Indiana withdraws now, it’s likely that within the next few years the majority of textbooks will be aligned to the Common Core and it’ll be up to state education officials to create supplemental materials that reflect Indiana standards.

Today a textbook might be stamped “Indiana,” but that doesn’t mean it was written with our standards in mind. 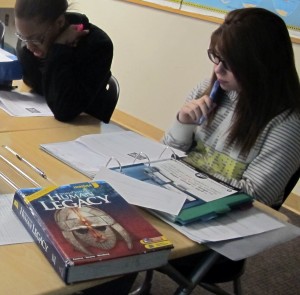 Even textbooks stamped 'Indiana' may not be well-aligned to current state standards. That's because for years the biggest states have dictated the content publishers print.

“In the past, what publishers have done is they’ve sort of tailored it or attempted to tailor it and tweak it to the individual state content,” says Porter-Magee, “but obviously there are limits to the amount of individualization that happens.”

Historically, two states — Texas and California — have cornered the market on textbooks. Because they have more students than, say, itty-bitty Rhode Island, publishers would consider their standards first and rework the material later for other states.

It’s led to curricular materials so similar across states and standards that University of California at Berkeley Professor Emeritus Hung-Hsi Wu has a term for it — “Textbook School Mathematics.” He explains:

Like Porter-Magee, Wu also advocates for adoption of the Common Core standards. But he is less optimistic that textbooks will be rewritten to align with the new standards.

So let’s say Indiana does pull out of the Common Core.

“Does that mean Indiana is going to have no individualization or no possibilities?” says Porter-Magee. “No, of course not. They have some materials now that they can capitalize on. … As long as there’s any state that has not adopted the Common Core, there’s going to be a market for non-Common Core aligned materials.”

Of course, Texas hasn’t adopted the Common Core. But just because it’s big player in the textbook market now doesn’t mean it will stay that way, says Porter-Magee. 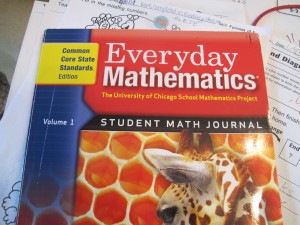 Publishers are aligning textbooks to the Common Core.

Porter-Magee says the onus will be on Indiana education officials to make sure teachers still have access to relevant materials if standards change and other states proceed with the Common Core.

But Nancie Rankie Shelton, an anti-Common Core activist who researches elementary-age literacy development at the University of Maryland, Baltimore County, says districts that have already started implementing the new standards might be swayed to stay the course if Indiana withdraws now.

“If individuals, districts or others in decision-making positions can be coaxed into spending funds on CCSS materials, I expect the need for other materials will dwindle,” Shelton writes in an email. “But I do not believe that educational decisions should be made based on corporate support.”

If Indiana weren’t the only state to pull out of the Common Core, however, all of the above could be a different story. It would probably take one of the larger markets like California dropping the standards, or some combination of other states doing the same, to make an impact.