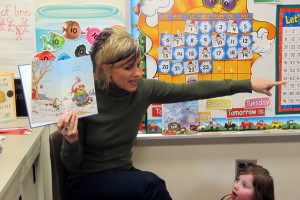 Lisa Coughanowr, a kindergarten teacher at East Side Elementary in Brazil, reads aloud to her students. She asks questions about the story to check their understanding.

About 86 percent of Indiana third graders passed a statewide reading exam in March that will allow them to advance to fourth grade.

That’s a slight improvement from last year — the first time the IREAD-3 was administered — when slightly more than 84 percent of Indiana third graders passed the test.

More than 11,800 students will have to retake the IREAD-3 this summer or risk retention.

We’ve posted complete statewide results of the exam to two easily-searchable tables. You can find results for your school or your district. (This year’s data also includes results for non-public schools.)

State education officials released the results with little fanfare. Superintendent Glenda Ritz has been fiercely critical of the high-stakes exam, citing it as the primary reason she ran against former schools chief Tony Bennett in November.

Ritz, a former teacher who worked as a media specialist in Washington Township, has said repeatedly Indiana needs to rethink how it handles students who aren’t reading at grade level.

“If you’re asking if I want the state of Indiana to get in the retention business, which is what it is now, the answer is no,” Ritz told StateImpact a public event in April. “I don’t think I have any business keeping a retention list at the state of Indiana and forcing those children to take a third grade test when, in actuality, the school corporation could move that child on to fourth grade.”

Here are five takeaways about this year’s results on Indiana’s statewide reading exam: