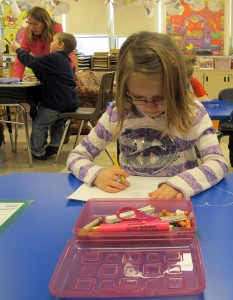 Indiana students aren’t the only ones adjusting to the Common Core, a set of nationally-crafted academic standards adopted by 46 states and the District of Columbia. Their teachers have been tasked with explaining key changes of the new standards not just to students but to parents, too.

Falls teaches across the hall from the Lisa Coughanowr and Hannah Reinoehl, the kindergarten teachers we introduced Wednesday in our look at how educators are reacting to the new standards.

Together with fellow teacher Kimberly Kelley, Falls writes a weekly newsletter to parents explaining what first grade students are learning.

“Our parents know at any given time what we’re working on in the classroom,” says Kelley. “We sit down with our instructional calendar at the computer together and look at the standard and say, ‘OK, how would we put these into our terms?'”

It’s Up To Teachers To Translate Core Standards For Parents

First grade teachers in Indiana implemented the Common Core this school year. They’re teaching  the first group of students who received instruction based on the new standards as kindergarteners.

“I feel kids are coming to us better prepared for first grade, but at the same time, we have more to teach them,” says Kelley.

But Kelley says it’s not always easy to communicate those changes to parents, even after a parent meeting at the beginning of the school year.

“We’ve told parents they’re coming down the line, but I just think it’s so overwhelming for them,” says Kelley. “For a lot of them, it’s over their head.”

Part of the problem is how the standards are worded. Even the pro-Common Core Fordham Institute concedes that the new standards aren’t as clearly written as the Indiana Academic Standards they’re replacing.

“If they could be in more teacher- or parent-friendly terms, I think that would be helpful for all parties involved,” says Falls.

What East Side Elementary’s First Grade Newsletter Looks Like

Here’s what Falls and Kelley wrote they were teaching in math for the parent newsletter the week of Jan. 21:

But to come up with those descriptions, Fall and Kelley had to put their heads together and put the Common Core academic standards into layman’s terms.

Here’s how the same standards they’re teaching are written into the Common Core:

Why Teachers Say The Common Core Needs Some Tweaking

Kelley says it’s also important to put the standards into terms kids recognize. When she and Falls are introducing new topics, their students help them make poster boards with easy-to-understand  examples. They’re hung on clothesline across the room so the first graders can reference the standards if they get stumped.

“While we are professionals and should be experts at this, two different people might have two different ways of interpreting the standards.”
—Kimberly Kelley, first grade teacher

For her part, Kelley says she’s not sure yet if the Common Core is better or worse than the standards Indiana had before. But she thinks the new guidelines could use some retooling for clarity.

“We have two different sets of Common Core assessments our principal let us order offline. Sometimes we use those, sometimes we use our own,” says Kelley. “If I’m sitting down with her and we have those two assessments, hers, mine and those two might all look different because of the terms the standards are written in, there’s so much open to interpretation.”

What Questions Do You Have About The Common Core?

Let the ed reporters investigate. Send questions to indiana@stateimpact.org with the subject line “Core Questions.” You can also send us a message on Twitter (@StateImpactIN) or on our Facebook page. Please tell us if you’re are parent, a teacher, a principal, a policy maker or a concerned citizen who cares about how the Common Core is going to change education in our state. We’ll find answers and share them right here at StateImpact Indiana.