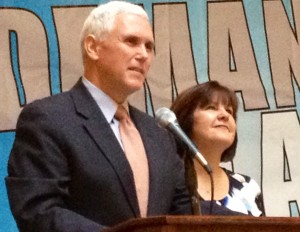 Gov. Mike Pence, standing with his wife Karen, speaks at the 'Ed Reform Rocks' rally at the Indiana Statehouse.

As Indiana lawmakers debate the future of the Common Core in the state’s schools, one prominent voice has yet to weigh in definitively for one side or the other: Gov. Mike Pence. The Indy Star‘s Scott Elliott blogs:

Should Indiana continue on its rapid pace to implement the Common Core and replace the ISTEP with Common Core-linked exams by 2015? Or should it halt implementation and return to its old standards, as some legislators would like? Lawmakers are struggling with that very question right now.

Pence has mostly used neutral language, saying Indiana needs to take a “hard look” at Common Core, without committing to one side or the other. But earlier this month, he answered a question about the Common Core with what sounded like sympathy for the opponents’ view.

Elliott referred in his post to Joy Pullmann’s story on School Reform News, a publication of the free-market Heartland Institute (they oppose the Common Core):

Pence suggested Indiana could reject the nationally-crafted academic standards and tests, but “mimic Virginia, which has not adopted Common Core or corresponding national tests, but has compared its education standards to Common Core so teachers can use Common Core materials…

“I will bring my anti-No Child Left Behind biases to this,” Pence said.

Hoosiers Against Common Core organizer Heather Crossin, who spoke with StateImpact last week, says she couldn’t determine from the statement whether Pence stood for or against pausing the rollout of the standards in the state’s classrooms — but she took it as a good sign.

“That’s an encouraging statement,” Crossin said. “I hope that time will tell.”

Elliott goes on to suggest Gov. Pence should be clearer:

Dumping the Common Core would be a huge about-face for Indiana, which was an early adopter with enthusiastic support from then-Gov. Mitch Daniels and then-state Superintendent Tony Bennett. If the new governor is going to take a different direction on such a big issue, it would be helpful for him to say so in no uncertain terms and end the guessing game about where he stands.

We have more on the state of the debate in the Indiana General Assembly and on what the standards themselves look like already in the state’s classrooms.