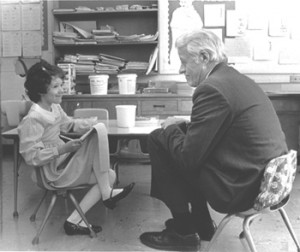 Indiana Gov. Robert Orr speaks to a first grader in 1985. Orr would pass his signature legislative package, "The Indiana A+ Plan," two years later. Click on the image to view the story where the image appears.

In the not-so-distant past, Indiana lawmakers passed a sweeping education overhaul — but not the overhaul you’re probably thinking about.

Before signing the law, Indiana’s governor called it a “giant leap” forward and “a powerful piece of legislation which is going to make a significant difference to … the young people of Indiana.”

The law, however, wasn’t passed in 2011 — like the charter and voucher legislation we often refer to as “Indiana’s recent education overhaul.” The governor wasn’t Mitch Daniels.

The year was, in fact, 1987. The governor was Robert Orr. The package was called “The Indiana A+ Plan.”

Of all the historical tidbits we sorted through to put together our hour-long radio special Progress Report, this one is particularly interesting to us: For how novel some of the changes to the state’s education policy can seem, Indiana enacted many of the same changes back in 1987.

“We were truly leading the country in these kinds of reforms back then,” Derek Redelman, the resident education expert at the Indiana Chamber of Commerce, told StateImpact last May.

Some of the changes seem pretty basic by today’s standards. The A+ Plan lengthened the school year to the current 180 days and created the ISTEP exams that Indiana students essentially take now, holding Indiana students to a single, unified set of academic standards — something taken as a given today.

But even some of the policies we consider “sweeping changes” have precedent in the 1987 law. 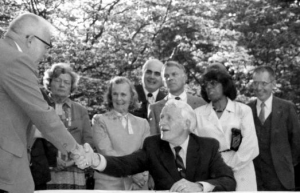 Photo courtesy of the Indiana Association of Public School Superintendents

Gov. Robert Orr signs into law a sweeping education overhaul known as the "Indiana A+ Plan" on May 7, 1987.

All of the above are still hot-button issues. But at the time, some wanted Indiana’s overhaul to go even further.

Orr originally wanted to extend the school year from 175 days to 185 — 180 was all he got. U.S. Secretary of Education Bill Bennett even accused the General Assembly and the state’s teachers unions of gutting the A+ plan by removing provisions that would allow for state takeovers at “bankrupt” schools… Takeovers… like… um, these?

Eventually, much of Orr’s plan was gutted anyway.

Orr’s plan raised taxes to front the package’s cost that one news account pegged at $550 million over two years (more than $1 billion in today’s dollars). But as the state ran into budget troubles in the early ’90s, money for the A+ Plan’s key programs — remediation, retention, financial incentives for performance — began to evaporate.

It’s relatively-recent history, but Redelman says the days of “A+” can feel like a long time a go.

“I think a lot of people have forgotten,” he says. “We had retention, we had rewards for performance, we had cash awards for schools that performed well. Nearly all of this went away by 1994.”

Not everyone’s forgotten, though. From an Evansville Courier & Press editorial:

Orr’s programs were created more than 20 years ago, and it remains unclear today just how his accountability measures improved education. However, few would argue with the premise that accountability is a key part of any evaluation system.

We might add that Orr’s creations led to that infamous phrase, “teaching the test.”

Meanwhile, it will be some years before any beneficial results of Daniels’ creations — vouchers, more charter schools and merit pay — become clear. Daniels will have moved on, but he will have left behind a number of smart tools. It will be up to others to decide how they are used.

(Images via The Indianapolis Star‘s archive and the Indiana Association of Public School Superintendents.)