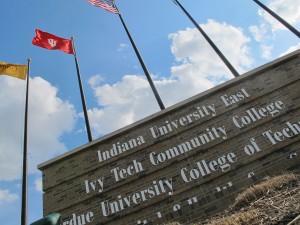 Indiana University East in Richmond saw a 14.7 percent increase in summer enrollment, far greater than the system-wide jump of 3 percent.

After their first year of offering tuition breaks to students taking summer courses at its campuses statewide, Indiana University officials announced Thursday the school will offer the discount again next year.

University officials announced the 25 percent discount last October as an incentive to help students save money and stay on track to graduate while utilizing facilities that normally sit vacant during the summer months.

As we wrote last week, enrollment in summer courses across the IU system was up three percent in summer 2012. Though that’s a more modest gain than university officials had initially predicted, the $11.8 million in combined student savings surpassed their initial projection.

“Regardless of whether we saw any gains, we knew we had a lot of students taking summer classes,” university spokesperson Mark Land told StateImpact last week, “so whatever we did — whether we had more or fewer students — we knew we were going to be benefiting a large number of students.”

While summer enrollment increases at the flagship Bloomington campus (up 1.1 percent) and IUPUI (up 4.9 percent) fell short of predictions, two regional campuses did surpass officials’ projections.

We pointed out last week public universities have been under fire at the statehouse to control costs and increase the four-year graduation rate — and IU officials billed this program as addressing those needs.

In launching this pilot program, we hoped to provide immediate financial relief to IU students and their families, while also encouraging more students to take advantage of our summer sessions to stay on track to graduate in four years, or even less. We also recognize that many factors contribute to summer school attendance, most notably the longstanding tradition of college students taking off during the summer months. In that context, we think the results of this program are a positive first step, upon which we will look to build this year.